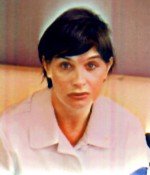 Irby was intoxicated the night of Feb. 11, 2009, when she drove her black 2006 Mercedes-Benz CLS 500 across five lanes of traffic and hit a Chevrolet Silverado C1500 pick-up truck head-on. It burst into flames, killing Drs. Mark Pogue and Lisa Dedousis, together to celebrate Valentine's Day. Irby and her husband, Stuart, were seriously injured.

After the crash, doctors for Stuart Irby said that he had suffered brain damage and had no memory of the event. A Hinds County jury indicted Karen Irby on charges of depraved-heart murder, but charges were reduced to two counts of manslaughter earlier this year due, according to District Attorney Robert Smith, to a bungled investigation the night of the crash, making it difficult to prove that Irby acted "recklessly," rather than the negligence more commonly required in drunk-driving deaths.

Hinds County Sheriff's Department Investigator Michael Huff, who was not present the night of the accident, reconstructed it just before Irby was set for trial this year, finding several errors in the initial report. He determined that she might only have been going a minimum 70 miles per hour on the city street rather than the 114 miles per hour that accident reconstructionist Christopher Barnhardt had initially determined, leading Smith to pursue the more difficult charge of depraved-heart murder.

Sheriff Malcolm McMillin, who was also police chief at the time of the crash, and an investigator close to the case told the Jackson Free Press in April that JPD had prepared a strong case for indicating Irby on three counts of aggravated DUI--which could have brought up to 25 years for each death or maiming, such as in the case of Stuart Irby's injuries. Instead, they said Smith re-indicted her for the more difficult-to-prove manslaughter charges, which would bring a lighter sentence than aggravated DUI.

At this morning's sentencing hearing, family members of Pogue and Dedousis expressed their opinions that Stuart Irby should also be held liable for the two doctors' deaths. John Dedousis, brother of Lisa Dedousis, said in a statement that Karen Irby spoke to his family before entering her guilty plea and described the circumstances surrounding the crash. Stuart Irby allegedly assaulted his wife while she was driving, which caused her to lose control and swerve into the truck carrying Pogue and Dedousis, John Dedousis said.

Family members of Pogue and Dedousis also requested that Green order the minimum sentence. In a statement, Irby apologized to the victims' families and asked Green for leniency for the sake of her children. "I am forever remorseful and scarred by this tragedy; however, I'm hopeful that you would consider the needs of my children as you seek justice in this matter," Irby said.

Green said that she had received numerous letters asking for leniency on Irby's behalf but that she had often sentenced good people to prison for bad decisions. "I would bet 80 percent of the people I've sentenced to jail have children that they must leave, and someone else cares for those children while they serve their sentence," Green said.

The letter concluded: "Call a cab. Call a friend. Throw away the keys, but for heaven's sake, don't drink and drive tonight. We are both in the best shape we've ever been today. We can't stand the thought of strangers pulling on our charred bones. We're in love and happy and can't wait to set up our home. For our family and for yours, have mercy, so that we'll have no regrets. We see your headlights coming, and you're not slowing down. We can't believe that you're crossing our center line and we have no place to go. You've given us no leniency, no mercy we can see, for it doesn't seem you heard our plea. Looks like you've been drinking and driving tonight."

Green told Karen Irby that she would reduce her sentence by two years, from the maximum of 20 years, "because this court does believe that Stuart Irby had a hand on that wheel that night."

"I'm not sentencing you today for Mr. Irby," Green said. "His day is coming. I don't know what happened in the car, but I've read the allegations and I've heard them again from the victims' famil(ies). So if there is some joint liability in this case, then I leave that to another agency than this court."

I think the Honorable Judge Green did the right thing in sentencing Karen Irby today. I even liked her commentary before sentencing. The doctors can't be returned, and I know we all would if we could. Irby gets punished and will have a chance to get out some day. If her husband is guilty of anything I hope he gets his punishment some day soon.

Agreed Walt, it was a tough sentence, nothing lenient but Green seemed to keep things in perspective. Can't really say there are any winners in this one.