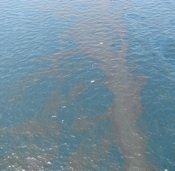 BP officials said they were optimistic about a plan to place a new cap on the gushing oil well in the Gulf of Mexico.

British Petroleum engineers attempting to contain the oil spill in the Gulf of Mexico will try to lower a second containment dome at the site, reports The Times-Picayune. Crews lowered the first, larger dome at the site this past weekend; however, the inside of the dome developed natural gas ice crystals and had to be moved several hundred yards away from the oil gushing into the Gulf at the rate of 210,000 gallons a day.

Crews will also attempt a method to "top kill" the failed blowout preventer at the site, pumping pieces of ground up tires and golf balls into the valve assembly at high pressure, The Times-Picayune goes on to say.

"All of the techniques being attempted or evaluated to contain the flow of oil on the seabed involve significant uncertainties because they have not been tested in these conditions before," BP said in a release.

The National Oceanic and Atmospheric Administration's forecasts show that the slick visible at the surface is currently moving west in the direction of Louisiana's Atchafalaya Bay, but is still moving inland toward the Mississippi coast. NOAA's 72-hour trajectory forecast shows oil hitting the state's barrier islands by Wednesday; however The Sun Herald reported Saturday sightings of tar balls on the beach at Alabama's Dauphin Island.