Dr. Susan Love: Be Aware Of Your Body 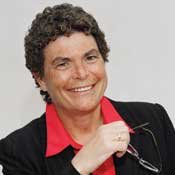 Author and surgeon, Dr. Susan Love is a tireless advocate for eradicating breast cancer in our lifetimes.

The Dr. Susan Love Foundation located in Santa Monica, Calif., is a non-profit group working to eradicate breast cancer in our lifetime. Love is known worldwide as one of the founding mothers of the breast cancer advocacy movement and is the author of "Dr. Susan Love's Breast Book," (Da Capo Press, 2005, $22.)

Love advocates for an integrative, holistic approach to medicine that treats the whole patient, not just the disease, and believes that research into women's medical issues should be completed on women, not male rats, as is the prevailing practice. Her wellness message, which is especially relevant to Mississippians, is straightforward: "Whether it's cancer, whether it's diabetes, whether it's heart disease, all of these things are worse if you're overweight. And also, exercise, apart from weight, decreases the chances of getting breast cancer, and it decreases the chances of dying of breast cancer."

Love believes science can find a vaccine for breast cancer, similar to that of the human papillomavirus, which causes cervical cancer. She spoke to the Jackson Free Press via telephone the day before she was to leave for Shanghai to begin a large-scale study to find out whether proteins found in women's breasts could be predictive markers for the disease.

The new testing recommendations for breast cancer have a lot of women confused and scared. Can you shed some light on them?

The studies that were done--the good randomized controlled studies ... were all done with women over 50 until very recently. So the good, hard data has all been in older women. ... reast tissue before menopause tends to be more dense. On an x-ray it looks white, and cancer looks white, so it's like looking for a polar bear in the snow. It's just not a very accurate test in younger women. The magic of 50 is that once you go through menopause, then your breast tissue turns to fat ... and cancer shows up against fat really well. So, in part, the issue is that it's a better tool in post-menopausal women.

Another issue is that the risk of radiation is higher in younger women than in older women. The younger woman's breast tissue is more sensitive ... so if you start getting mammograms every year when you're in your 30s, the cumulative radiation ... of doing it every year starting at 30 and going into your 50s is high enough that you actually see some cancers actually caused by the radiation. It's not like this is a risk-free test. ...

... The guidelines (change on a) regular basis. This time there has been as study the U.K., looking specifically at women 40 to 50. It's a randomized study, and it shows that if you follow those women for 10 years, when they have their first mammogram at 40, you see no benefit.

So you've got this mixture of data, and it's on the edge whether it's worth it for a younger woman. As a public screening policy, they suggested that we should not be doing it at 40. But they did say that women should discuss with their doctors, and look into their individual cases and decide what the right answer is for them. That got lost, but that's actually what the guidelines were.

So women should still take into consideration their family history and other risk factors, right?

Exactly. If you're at high risk, then you might well do something different.

Now, the other thing they said that got misunderstood is that doctors should no longer teach breast self-exam. That was interpreted as: "You should never touch your breasts again." (One woman over 50) said, "I had a mammogram, and it was normal, and then I felt a lump. If I had followed the guidelines, I'd be dead."

If you feel a lump, you're supposed to go do something about it!

The reason that they said we shouldn't teach BSE is that there's been a very good randomized, controlled study that showed that formal, what I like to call religious self-exam, is no better than the normal poking around we all do. ... [T]hey did a large study in China where they trained one group very carefully in formal self-exam, and they video-taped, and they critiqued them, and there was this whole song-and-dance. And the other group they didn't do anything. After 10 years, there was no difference in the number of cancers found, in the stages of the cancers, or in the death rate from the cancers.

How big was the study?

It was huge; it was about 10,000 women. ... The thing that everybody misses is that the control group found their own cancers. They don't do mammograms, and they don't do yearly physicals (in China), so they found their own cancers. They just didn't find them doing formal, religious breast self-exams. In the shower, rolling over in bed and your lover finds it--whatever--just poking around. It's the "Gee, let me feel around in there" that most women do.

... So really, what the study said is that normal poking around is enough. And therefore, if you're writing a scientific guideline, it makes sense to say, "Don't waste a doctor's time training you in formal breast self-exam. It's no better than your own poking around."

What should younger women be doing?

Younger women should be aware of their breasts, and it doesn't mean just at one time of month or any of that. It means be aware. ... Just be comfortable and be aware of your body, and if you feel something that feels abnormal, get it checked out. ... If there's something that's funny, and if the doctor doesn't want to pursue it, then get another doctor.

A lot of the fear lies in the statistics: One in eight women will develop breast cancer.

In a 20 or 30-year-old, (the risks) not that high. I mean, it happens, but I think the media also conflates that ... [T]hey always use a young woman because it's so much more tragic and sexy and dramatic. They never have a 65-year-old. The average age for breast cancer in this country is 65 or 66 or 64. It's not to say it doesn't happen young, but ... I do think we've scared people a lot.

Are there different guidelines for African American women?

Are there medical practices done out of habit that women shouldn't be subjecting themselves to?

I think in general, we over test and over do. ... Pap smears, for example: The data for a long time has shown that if you're monogamous and have had three normal pap smears then every three years is fine for a pap smear. And yet, most women probably either don't do it, or they go every year. That's promoted by gynecologists a lot because they want to see you every year; that's how they make their money. That's the problem with the fee-for-service health-care system. But, in actual fact, we probably do many more pap smears than we need to do. And that may even get to be less with the vaccine.

What about the human papillomavirus vaccine (HPV): Is it a good thing?

I think it's wonderful. It's great, and I have a 21-year-old daughter, and I had her vaccinated, nagged her, kicking and screaming. I think it's great. That, in a way, is my model for what we need to do with breast cancer. When I was a resident, 30 years ago, if you had an abnormal pap smear, you had a total hysterectomy, because we didn't know what else to do. ... And then we figured out it was sexually transmitted; and then we figured out it was the virus. And now we have a vaccine. So in 30 years, we went from not knowing what we were doing to having a vaccine. ... [Breast cancer] could be caused by a virus, and if a virus caused it, how cool would that be: we could get a vaccine and then we wouldn't have to worry about all the rest of this junk.

Do you think that's really a reality in our lifetime?

Absolutely, I do. Absolutely! But, we have to do it. We have to focus on it.