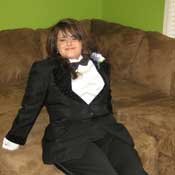 Constance McMillen unwraps a Super Sonic Burger from a bag full of tater tots at her kitchen table in Fulton. Her long, dark hair is curled, and her face is made up. She's wearing a new black T-shirt that reads "I (Heart) NY."

She is tired and hungry and has at least two more interviews with reporters on this Sunday evening, and it's already 5 p.m.

It's been a busy day for the 18-year-old lesbian and a crazy week ever since Itawamba County Agricultural High School canceled her prom because she wanted to bring her girlfriend as her date. She also wanted to wear a tux.

A media frenzy had Constance in New York City Friday, March 12, taping for three national shows. She and her family got back to town late Saturday night. Photographers and stylists from People magazine came to her home Sunday for a photo shoot.

Her dad lies on the couch, trying to get a little rest before another heavy bout of media attention Monday morning--they are supposed to be in Memphis to tape appearances on the "Joy Behar Show" and "Countdown with Keith Olbermann." She has more than 4,000 new friend requests on Facebook and almost as many messages that she hasn't had time to return. She's hoping she can take a couple days off over spring break to relax.

For those who say she wanted all this attention, she says it's the school district that created this circus, not her.

"They would rather cancel the prom because of the media coverage," Constance says. "That caused more media attention. All this media is good. People going through this will know to contact the ACLU or Mississippi Safe Schools Coalition. Maybe it will encourage people to stand up for themselves."

"This wouldn't have happened if you had the right last name," Dana Stewart, Constance's aunt, says. Her grandparents nod in agreement.

"It's always been this way here," says David McMillen, Constance's grandfather. He went to the same high school and remembers which kids were allowed to get away with anything and those who weren't.

"It's about being different or outside of being the norm," Constance says.

Constance first challenged the school policy back in December. She went to the vice principal and told him it was unfair. She says he essentially agreed with her.

"I had heard about the Ceara Sturgis case. She really inspired me," Constance says.

Sturgis, who attends Wesson Attendance Center, wore a tux for her senior portrait. Her school decided not to include her picture in its yearbook. Sturgis challenged the policy.

With that encouragement, Constance started making her case at the school level first. "I went through the chain of command," she says.

Constance ran into a brick wall. By January, she had learned that besides not being allowed to bring a same-sex date, she couldn't wear a tux to the prom. No girls would be allowed to wear pants.

"I don't think you have to dress feminine if you are a girl," Constance says. Besides, she's just not as comfortable in a skirt. She also challenged this prom policy.

"No," Constance countered, "that's your definition."

"Formal dress" at her prom would allow girls to show cleavage and have skirts slit high up the thigh. The tux Constance planned to wear would have covered her whole body.

Constance talked to Teresa McNeese, superintendent of Itawamba County Schools, about her desire to go to prom.

"What if I want to slow dance with my girlfriend?" Constance asked McNeese.

"I'm going to ask you not to  push buttons," McNeese said, according  to Constance.

"I don't like a lot of attention," Constance says in between bites of her burger. "I have a lot of respect for others. I have a right to slow dance. I'm not asking people to be gay."

When Constance took her complaint to the school-board attorney in January, the lawyer told her, "The prom is elective."

Frustrated and upset, Constance went home crying that day. She called her mom, Denise McMillen, who lives in Wiggins.

"A lot of people don't like gay people," Constance says. "Our school promotes hiding who you are."

In February, a freshman boy at Itawamba County Agricultural High School came to school dressed like a girl and was kicked out, Constance says. He's a home-school student now until he can take his GED exam. To protest his treatment, 18 girls including Constance went to school dressed like boys in baggy pants, men's shirts, boots and put their hair up in hats. Constance wants school officials to see the pain that boy experienced.

"I want to help them understand, and maybe they can have compassion," Constance says.

It baffles her why posters at school encourage kids to "Be Yourself" when it's not school policy. Tattooed right above her left wrist is a circle with the inscription "To thine own self be true."

On her left wrist are bunches and bunches of skinny bracelets. One is a black-and-white braid of thin threads. One is a yellow plastic band with hearts and the word "Princess." She has several skinny Silly Bandz, thin and squiggly, almost transparent little rubber bands.

"This one is a girl," she says, pulling at a pink band. She takes it off and rolls it around on the kitchen table. "It's not doing right." She fools with it some more, and then it magically takes the shape of the international woman's silhouette on every rest-room door. "See?"

Fulton is a small town controlled by a small group of conservatives, Constance says.

"This whole town wants to be like a Utopian type of place," she says.

Coming into Itawamba County on U.S. 78, a sign proclaims "Itawamba: Native American Name, Classic American Community." The high school sits on top of small hill and the neat campus looks more like a private school than a public one. Nearby, houses under construction have solar panels on the roofs. Banners around town welcome home the 155th Brigade of the Mississippi National Guard. Joggers wearing Ole Miss sweatshirts run along the paved path along the Tombigee River.

While some at school and in town have been hostile to Constance, a lot of people have her back.

"For the most part, there's good people here," says David McMillen, Constance's grandfather. He says several boys who go  to school with Constance called and  offered to walk her to class if she wanted their protection.

"I've always told my children, you are no better than anyone else. But you are just as good as anyone else," she says. "I raised them to stand up for what they believe in and not for being something they are not. I love them unconditionally. I'll always stand behind them. There's nothing you can do so I'd turn my back on you."

Standing out on the carport now, the women in the family take a cigarette break.

"Did you tell her about your community service?" Dale McMillen asks her granddaughter.

"No, I don't want to be bragging," Constance says, a little irritated and looking away.

Dale McMillen is happy to brag about how Constance worked with the local food pantry and how she takes care of stray animals. Constance goes inside the house.

"She stands up if boys hit or tease dogs. She'll speak up," says her aunt Dana Stewart. "I want people to know not Constance the gay girl, but Constance the person."

Constance wants to stay in Fulton after graduation. She's planning on going to Itawamba Community College here in her hometown. After that, she wants to transfer to the University of Southern Mississippi and get a degree in psychology and continue at USM for a graduate degree. She wants to go into family counseling and do work with drug rehabilitation. Her family jokes maybe she should run for office, maybe governor. That doesn't interest her too much.

"I just want a normal life," she says.