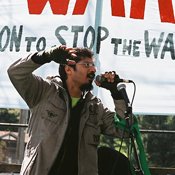 Shahid Buttar will be the guest speaker for "Cross-Pollinate: A Speaker Series" at the Jackson Community Design Center on Friday, where he will discuss government accountability as it relates to the war on terror.

As a college student in Chicago, Shahid Buttar sometimes would fish his next meal out of a trashcan. Often sleeping on the streets or couch surfing, Buttar found solace in the electronic rhythm of house music.

"One of the things that really struck me was that there was equal numbers of black and brown (people). House music brought together the most diverse people from all walks of life," Buttar told the Jackson Free Press. "That's when I started seeing music as a vehicle to bring people together."

Buttar, 35, says his experiences in Chicago led him to become a political activist, hip-hop and electronic MC and civil-rights lawyer. Buttar, who now lives in Washington, D.C., will be the guest speaker for "Cross-Pollinate: A Speaker Series" at the Jackson Community Design Center on Friday, where he will discuss government accountability as it relates to the war on terror.

Buttar, a Pakistani-American, was born in England and moved to
Missouri when he was a child. Buttar says that his family suffered financial difficulties in the early '90s and after their family home fell to foreclosure, he moved to Chicago where he graduated from Loyola University with a degree in political science in 2000.

While attending law school at Stanford University in California, Buttar became involved in organizing non-violent protest to speak out against President George W. Bush's war policies and advocate free speech. In 2003, he started the DC Guerilla Poetry Insurgency, a collaboration of artist, poets and musicians who use spoken word and music to promote social change. In 2008 he released his debut CD, "Get Out of Your Chair," a fusion of R&B, hip-hop and blues with socially conscious messages.

Buttar says he will speak about the need for the Obama administration to take a stronger stand against torture during his trip to Jackson.

"I'm supportive of the president, but if you look at surveillance, or torture with impunity, it's worse than under the Bush administration," Buttar says. "... This is Democrats scared of looking weak on national security."

Buttar says he wants to encourage Jackson to come together to strengthen civil rights.

"There are measures communities can take such as setting protections against racial profiling," he says.

Buttar is the co-director of the Rule of Law Institute. He is also the director of the Bill of Rights Defense Committee in Massachusetts and a regular contributor to The Huffington Post, where he writes political columns.

Mama Akua and Baba RahLeeCoh were the oldest persons at the rap party on Millsaps Ave., on Saturday night, where Mr. Buttar spit socially relevant rap lyrics. They were also the most energetic as they danced through each one of Brother Shahid's hard hitting messages that were almost too fast to keep up with, as he exhibited the spirit of Snoop Dogg and Eminem, yet with lyrical meaning and content that projected a positive goal for human interaction and a glorious direction for Democratic justice and freedom--an unbelievable treat for JACKSON. Doctor Daddy