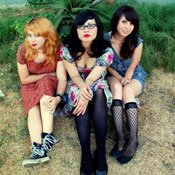 Frontman Jamie Barrier, also of the Pine Hill Haints and The Wednesdays, launches double-entendres involving hot chocolate and butter knives against classic--and classically mangled--licks and beats. Throw in the occasional howl, and there it is: party rock for shape shifters.

There are numbers, however, such as "The Hearse," that are less fuzz and more punchy keyboards and sing-song melodies. Think old, obscure reggae or a dark take on Vampire Weekend, although the latter is probably not in rotation on the Werewolf tour van. All of which figures because, on a Myspace list of influences that includes ice-cream cake and Clint Eastwood, the only actual musicians are Suicide (a synth-heavy, proto-punk gig that molded Thurston Moore) and Fred Cole of the eclectic Dead Moon. What's not to like about a heavy dose of living room lo-fi and song titles like "The Indian Curse Will Bring You Back to Me"?

Historical scholarship is evidenced in the BomBon's familiar riffs: aggressive bass-lines, clean drumming and trembling vibrato. This is almost a given, considering that Bombon hails from San Pedro, one of the most legendary, still-vibrant punk communities in the U.S. Their drummer, Jerico, may be a moonlighting guitarist, and bassist Paloma may have just celebrated her first full-year of musicianship, but their legacy is as solid as Angela's vintage Harmony Rocket.