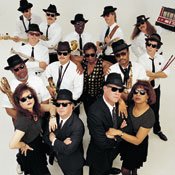 It's an annual tradition: green beer and the Bluz Boys at the St. Paddy's post-parade Hal & Mal's street party.

The week of the St. Paddy's Parade is, without question, the biggest party of the year in downtown Jackson. Every venue close to downtown joins in the spring celebration with all manner of music. Check Hal & Mal's Web site (http://www.halandmals.com/stpat) for daily events leading up to Saturday's parade, and for the post-parade street party, which is always a good time, with the Blues-Brothers-inspired Bluz Boys and the Pinstripe Brass Band. Just beyond the gates of the "official" party, catch rap icon Vanilla Ice at Club Fire with U.S. and Bag of Donuts at 2 p.m. As always, Fenian's Pub will get their Irish on with their annual street party from noon to midnight. They'll have music inside and outside all day, including two authentic Irish bands: Legacy and Spirits of the House. See the JFP music calendar for all the Saturday details.

Once the St. Paddy's celebration is over, the next week holds lots of events worth checking out. The Brooklyn experimental electro-post-punk trio These Are Powers will trip out One to One Studio Monday night, with U.S. Girls, Talk Normal and local favorites Roosevelt Noise rounding out the bill. Also Monday, Arlo Guthrie performs at the Gertrude Ford Center in Oxford. Martin's hosts a CD release party for Mississippi John Doude's Voodoo Panther next Wednesday, March 25. The Doude describes his music as "outlaw-country-juke-joint trance," which sounds cool and eclectic. Listen to his music at http://www.myspace.com/mississippijohndoude.

Next Thursday, the Mississippi Museum of Art will host their monthly Jazz, Art and Friends event with music, food and world-class art. Also Thursday, the whiskey-soaked garage-outlaw countryman Willie Heath Neal brings the love back to Ole Tavern on George Street.

Next Friday, March 27, offers three music events for your listening pleasure. Sneaky Beans coffeehouse in Fondren hosts a "Songwriters in the Round" series the last Friday of each month. Local U.K.-inspired psychedelic post-punk band Ape Champ hits Martin's next Friday. They might just be the next big thing cooking around town. Also, Jacksonion-turned-Nashville-rocker Brian Fuente is back with his band Newmatic with Perrin Lamb in Hal & Mal's Red Room. Check them out at http://www.myspace.com/newmaticrocks.

Head to Hal & Mal's Big Room Saturday, for the best hip-hop in town: Kamikaze, DJ Phingaprint, Skipp Coon, 7even:Thirty, 5th Child and Pyinfamous. Across the street at Martin's, check out Good Enough for Good Times, which includes members of Galactic and the Charlie Hunter Trio.

Stay tuned April 2-5 for the 10th Annual Crossroads Film Festival. Check us out at http://www.crossroadsfilmfest.com.

If your spring break is this week, you can truck it to Austin for South X Southwest, which has a stellar lineup. If your spring break is next week, you're in luck for some great House of Blues New Orleans shows with Glasvegas next Monday, March 23, Pendulum and Late of the Pier
March 24 and Chairlift March 25. At press time, tickets are still available for the Brian Jonestown Massacre in Memphis April 11; Galactic in Oxford April 15; Dinosaur Jr. in Oxford April 18; Umphrey's McGee in Oxford May 2 and Animal Collective in Oxford June 6.

Judging by the pollen count on my car, spring is here and Jazz Fest and the Oxford Double Decker Festival are set for April 25. Make plans and buy your tickets early. Plan your time off and strike out for Bonnaroo in Manchester, Tenn., June 11-14 for Phish, Beasties, Wilco, MGMT, Paul Oakenfold, NIN and a long list of others.