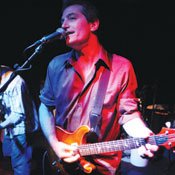 In case you haven't heard, the Downtown at Dusk music and food event is moving indoors to the Mississippi Museum of Art this Thursday, 5-8 p.m. It's even free. Be social and enjoy some food and music by The Blues Messengers. After that, stay downtown for Pryor Graebor and the Tombstones at Hal & Mal's at 8 p.m. or the Irish-meets-blues folk of Dead Irish Blues at Fenian's from 8:30-11:30 p.m. Also Thursday, favorites Time to Move Band will be at Dreamz Jxn 9-11 p.m. and Parker House in Ridgeland hosts a Lazy Magnolia beer event, dinner included, with Gena Hall Stringer performing during the Mississippi brewery tasting from 7-10 p.m.

The big rock ‘n' roll show Friday night will be a quadruple tour de force at Ole Tavern with New York City-based alternative power-pop band The Paul Collins Beat, Thee Hypnotic Chickens, the Used Goods and ¡Los Buddies!, 9 p.m. $10. You may know Paul Collins as the founder of cult favorites The Nerves who toured with The Ramones in the 1970s, and wrote the Blondie hit song "Hanging on the Telephone."

If you dig The Kinks and Ramones-style rock ‘n' roll with tons of hooks, you will dig this show, as well as the area bands influenced by the New York City 1970s CBGB rock scene. Also this Friday night, DJ Redcley will be back at the Afrika Book Café in Fondren with his African funkadelic sounds, mixing up old-school soul, Afropop and more from 8 p.m.-1 a.m. While you're there, try out the West African food from Chitoes African Deli in south Jackson.

It'll be a pretty big night to club hop the offerings on Commerce Street downtown Saturday. You may remember W.C. Don's favorites Beanland and the Kudzu Kings from the '80s. Beanland frontman and Mississippi native George McConnell returns with his solo band to Martin's this Saturday at 10 p.m. McConnell has been keeping the roots-rock jams strong over the years serving as lead guitarist for Widespread Panic from 2002-2006

Also Saturday, another old Don's alt-southern-rock favorite Drivin' n' Cryin is at Fire, just down the road from Martin's. After a many-years break and a few band member surgeries, Drivin' n' Cryin put out a new album last year, 12 years after their last full-length album.

The Mississippi Arts Center on Lamar Street downtown will host the next performance by the Mississippi Improv Alliance Ensemble this Sunday, 2 p.m. Call 601-497-7454 for details. If you dig the blues and don't mind the heat, F. Jones Corner will continue its Dog Days of Summer free outdoor Sunday concerts this Sunday evening, 6-10 p.m. A host of local blues favorites will rotate through some sets. Beer will be on hand to cool you down.

After several years running, the Monday night Central Mississippi Blues Society jam is hotter than ever in Hal & Mal's dining room, 8 p.m. Free. Each jam features King Edward, Malcolm Shepherd, Dennis Fountain, Pat Brown, Abdul Rasheed and many of the areas other blues elite who keep it fresh. The music starts promptly at 8:30 p.m., so it doesn't have to be a late night unless you want it to be. It's the best thing happening on Monday nights. Check them out at http://www.centralmississippibluessociety.com.