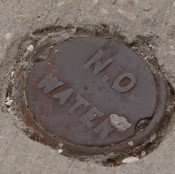 Jackson citizens and businesses are doing their best to adapt to the lack of water caused by several days of sub-freezing temperatures.

Due to more than 100 water-main breaks, parts of Jackson continued to suffer from low or nonexistent water pressure today, forcing area businesses to close or otherwise adapt.

Steve Long, owner of Steve's Downtown Deli, described the water pressure at his restaurant as "low, but not unworkable," but the closure of state offices has affected sales, he said.

"Yesterday, right when I opened it seemed like the world evacuated," Long said. "It kind of killed me yesterday."

Long is open again today for lunch but not serving beverages with ice or cold water. Further north, Jeff Good announced today that his three restaurants, BRAVO!, Broad Street Bakery, and Sal and Mookie's Pizzeria, will be closed today because none has sufficient water pressure for restrooms.

Melvin Davis, owner of Lumpkin's Barbecue on Raymond Road, said that his restaurant's water pressure has remained steady, allowing him to stay open yesterday and today. "It would not have been good (to close)," Davis said. "We are a struggling business, so we can't take big hits like that."

Like other restaurants still open, Lumpkin's is boiling water for iced tea and selling canned soft drinks. Davis also took advantage of his restaurant's water pressure by filling up 5-gallon containers to take back to his house, which has lost water service, and to neighbors.

The emergency has also forced adaptations at area hospitals. Baptist Hospital, which is suffering from low water pressure, has cancelled elective surgeries for today and Wednesday and installed portable restrooms outside its medical office building. Hospital staff are delivering water to patients' rooms and to restrooms. The hospital has gotten help from outside sources like the University of Mississippi Medical Center, spokesman Robby Channell said.

"The Jackson Fire Department is great; they've brought us water," Channell said. "UMC has been helping us with laundry and sterilizing instruments."

Because it relies on well water for its main hospital and school buildings, the University of Mississippi Medical Center has not had to cut back those services, but the Jackson Medical Mall and some clinics on Lakeland Drive, which use the city's water system, are closed, according to UMMC spokeswoman Patrice Guilfoyle.

St. Dominic's Hospital is using bottled water for consumption and drawing on its private water tower for medical purposes, according to a statement released this morning.

Low water pressure has affected restrooms and heating at Millsaps College, forcing the college to cancel classes for the rest of the week. Public Relations Coordinator Kara Paulk explained that once water pressure is restored, the college's hot water heaterswhich heat dormitories and campus buildingswill still take some time to warm up. The campus will re-open Tuesday, Jan. 19. Jackson State University closed down today, as well.

Mayor Harvey Johnson Jr. said at this morning's City Council meeting that the city's water system has suffered 106 breakages and that crews from the Department of Public Works have repaired 67 so far.

Yesterday, Deputy Director of Public Works David Willis explained that while the city's water lines vary in age from 100 years old to less than 20 years old, many of them are made of cast iron, which tends to be more brittle than the materials workers will be using to repair the breaks. Johnson maintained, however, that the breaks are more due to swelling of the Yazoo clay surrounding the pipes than the pipe material itself.

Public Works Director Thelman Boyd told the Jackson Free Press that the water line breaks are spread throughout the city randomly. He also could not give an estimate of when work crews could restore water pressure to the entire city.

water pressure alone is not sufficient to remain open as a food service facility. The Health Department must receive written documentation as to the corrective actions being put in place under the boil water alert, and then will give restaurants the okay to remain open. More information, including the form to use and where to fax it, is available at www.msra.org or by contacting me at [email protected]

Let's get some money from Obama and build new pipes.