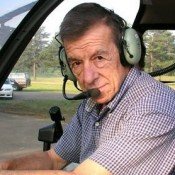 "Chopper Bob" Rall and "Skycopter" have been patrolling Jackson's skies since 1997. He passed away in his sleep this morning.

"Chopper Bob" Rall, Mississippi's only helicopter traffic reporter, and the "Skycopter" have been staples in the Jackson skies since 1997. Rall was 12 when he moved to Jackson in 1954 with his family from Pittsburgh, Pa. Four years later, he was on the airwaves, disc-jockeying at WJXN radio. Rall died in his sleep early this morning.

He and Al Simmons "invented Jackson's first radio 'talk' show," according to WLBT:

Unlike today's talk radio, the show was a mixture of famous and not-so-famous guests across the USA, an occasional song, and daily foolishness. Bob and Al talked to Roy Rogers, Charles Schultz (Peanuts), Queen Elizabeth's personal secretary (hoping to sing "Happy Birthday to the Queen), a woman who lived in a tree in Miami, Bob Hope, and over 2,000 other guests during the nine years the show was on the air in the afternoon.

Rall had two sons, Mike and Bob, and a grandson, Blake. He and his wife, Elizabeth, lived in Madison, and he attended St. Philip's Episcopal Church.

Just yesterday I heard his forecast and traffic reports. In a New York minute, everything can change.

Dan Modisett at WLBT provided the following information for those of you who would like to pay your respects: Funeral services for Bob Rall will be held at 11 a.m. Friday at St. Philip’s Episcopal Church, 5400 Old Canton Road in Jackson. Visitation will be held 9:30 a.m. to 11 a.m. at the church.