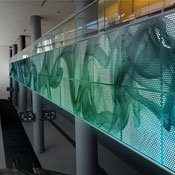 NunoErin's 300-foot installation, shown in the rendering above, will hang in the Jackson Convention Center. Manufacturing and installing the panels will take about four months.

When Erin Hayne first brought her Portuguese husband home to Mississippi, the humidity immediately consumed him.

The state's climate inspired "Kinetic Vapor," the winning proposal to create signature art for the Jackson Convention Center. NunoErin, the couple's studio, won the international competition with the idea of visualizing vapor dancing over the ground using light and aluminum panels stretching 300 feet. They were the only artists in Mississippi to compete.

The 75 panels making up the long piece of public art will run the length of the center's interior along a wall separating the first and second floors. Escalator riders will see the image change as they go up and down. Passersby will see the gigantic metal ribbon from the sidewalk and neighboring buildings.

Half a million little aluminum dots bent at hundreds of varying angles in the panels will imitate raindrops. Ambient light will hit the panels of raised, tilted dots in swaying patterns of silver, gray and purple hues. From beneath, computerized LED lights will dance like water vapor patterns gracefully unfolding and spinning in air currents, sometimes with more intensity and sometimes with less. Different lights will graze the sides of the circles, creating varying effects.

As visitors move around the panels—from the escalators or across the street—the patterns will shift, the light will refract new colors. An optical illusion will surface as the fixed pixel-like dots will seem to move like reflective scales on a chameleon, with more than 16 million possible colors.

Hayne and Ferreira took pictures of water droplets to study when they first began work on their proposal. Hayne says interactivity with the images was key.

"We wanted to know how we can have a relation between art work and the people inside," Hayne says. "How can they be affected?"

The two designers—who got married in the Cypress Swamp with a mutual love for Mississippi nature—live and work in a downtown space on Congress Street. NunoErin morphs from a sleek, modern furniture showroom into a futuristic technology lab, melding art and science. All their work revolves around subtle, constant changes in the environment and how people discover that environment.

NunoErin designs furniture and wall hangings that change color when you lean against them or sit on them. The Love Handles chair is the latest piece of furniture NunoErin covered in thermo-sensitive material. It's manufactured in Tupelo and is extra-wide, wider than your average extra-wide chair with ample cushioning. It has a low back but no sides for arms to rest. On either side, the chair droops slightly like a little extra belly weight lapping over a belt. A specialized coating helps create the green-purple mood-ring color change when body heat presses against the surface. Stools shaped like cypress stumps, acoustic tiles that mimic waves and over-sized, asymmetrical benches for a small crowd all leave evidence of recent visitors' hand prints that will fade and return to it's original dark, even black color.

The furniture sells. Right now you can find it in hotel lobbies, hospitals, museums and residential spaces. It is also in concept stores, new bars and nightclubs, a casino in Macao and in the Mayo Clinic. Playboy magazine has expressed interest in using the furniture in an upcoming photo shoot.

NunoErin also experiments with bioluminescence, using products made from organisms that glow in the dark. Painting sidewalks throughout a city with a process NunoErin calls Luciform would create bottom-lit sidewalks that absorb sunshine during the day and glow for eight to 10 hours at night. Parks could be lit at night. Stargazing in the city would be possible because of the low ground light lighting. And there's a practical application. Luciform could aid cities in natural disasters and power outages. Street markers could be seen under water during a flood.

Hayne and Ferreira moved into the downtown studio six months ago. They say they wanted to be part of a city evolving into a cosmopolitan center. When the competition for the convention center project opened last year, they jumped at the chance to help define a Mississippi identity.

"We thought it would be amazing if we had the opportunity to do something for Jackson, to be involved somehow," Hayne says. "We worked really hard. It was a big risk, and a big responsibility—we were the only ones from Mississippi. This shows that young people here can compete."

"It's the perfect moment for creation," Ferreira says. "You feel, this is something—that moment, click, opportunity, gift ..." He looks at Hayne and leans forward, searching for the right word. She rocks back on one foot, looks at him and smiles.

"I know," she says, leaning toward him.

"We have to have a fantastic sense of humor to work and live together," Ferreira says. "It's a crazy back-and-forth process."

Awesome! The kind of art we need in Jxn!