Jackson One of 20 Strongest-Performing Markets 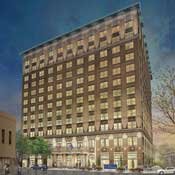 The King Edward Hotel, scheduled to reopen later this year, is just one of the many development projects in the Jackson metro area.

A new report issued by the Brookings Institution in Washington, D.C., ranks Jackson as one of the nation's strongest-performing metro areas in the country. The MetroMonitor report tracks the recession and its recovery, and examined the 100 largest metropolitan areas for the second quarter of 2009.

Among the indicators Brookings looks at to compile the quarterly report are changes in: employment and unemployment rates; gross metropolitan product (GMP, or total value of goods and services produced within the metro area); housing prices; and foreclosed properties that fail to sell at auction.

"What I've read is very encouraging," said Ben Allen, president of Downtown Jackson Partners. "They're saying what we've been sayingand the (Mississippi Development Authority's) been sayingforever."

Calling Jackson a recession-proof economy, Allen pointed out that the largest employment driverseducation, government and hospitalsall have a strong presence in the city, and that Jackson's work force is highly educated. Those indicators mirror at least two of what is keeping Pittsburgh, Pa., as another area least affected by the recession: higher education and health care.

"We're not dependent on a hub-cap factory," he said, adding: "The report didn't surprise me a bit."

Of the $3.2 billion currently invested in the city's development, Allen said that 80 percent of that is from outside the state. "This validates what we're saying," he said.

Saying that the South was "overrepresented" in both the strongest and the weakest performing areas, the MetroMonitor report included six cities in Texas (Austin, Dallas, El Paso, Houston, McAllen and San Antonio), Baton Rouge, La., Columbia, S.C., and Little Rock, Ark. in addition to Jackson among the top 20 strongest performing metropolitan areas. The 20 weakest metro areas include eight cities in Florida (including Miami, Orlando, Jacksonville and Tampa), three in California, Detroit and Grand Rapid, Mich., and Toledo and Youngstown, Ohio.

Overall, the report indicates that the economy is "no longer in free fall," and, while many areas continue to suffer, the recovery is underway, with many cities showing at least small increases in GMP. Three citiesAustin, Texas, McAllen, Texas, and Washington, D.C.are showing signs of a full recovery, according to the report.

"While U.S.-wide economic indicators are no longer plummeting, great uncertainty surrounds key factors such as the stability of the housing market, the future of U.S. automakers and suppliers, and the health of state and local governments in the face of mounting budget deficits," the report concludes.

"Policymakers evaluating further steps to accelerate recovery should pay heed to the (report's) multicolored map of metropolitan economic performance and consider strategies that would help rejuvenate the communities in greatest danger of being left behind."

The Brookings Institution is a nonprofit public policy organization. Its mission is to conduct high-quality, independent research and, based on that research, to provide innovative, practical recommendations that advance three broad goals: strengthen American democracy; foster the economic and social welfare, security and opportunity of all Americans; and secure a more open, safe, prosperous and cooperative international system.

Remarkably, the Ledger buried this on the bottom of their business page yesterday, inside another section. My theory: It flies into the face of the excuses they've been making -- blaming the tanking Jackson economy -- for their shrinking paper and staff. So they buried it. Just my theory, of course. But why in hell wouldn't such news about Jackson's economy get at least the same play as crime stories in a paper that is headquartered here?!?

To answer your question: it's the Clarion-Ledger; what else is new? And just to shine an even bigger light on Jackson, we rank 10th!