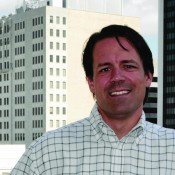 Jackson developer Ted Duckworth has been an ardent supporter of downtown development for two decades.

Ted Duckworth, owner of Duckworth Realty in Jackson, has been the driving force behind millions of dollars worth of development in the city. Graduating from Mississippi State University in 1988 with a degree in real estate and mortgage finance, Duckworth, 42, started his company the following year.

"The key is we've got to get more people living down here," Duckworth told BOOM Jackson magazine last year. "And we have to have more activity after hours."

To Duckworth, who is also chairman of the Downtown Jackson Partners board of directors, that means mixed-use properties in the heart of the city. He has been demonstrating his belief publicly for many years, developing such properties as the the Heritage Building on East Capitol Street and the Electric 308 Building on East Pearl Street. Each of the properties combines retail or restaurant space, offices and residential units.

Recently, the Mississippi Development Authority granted Duckworth the rights to develop the old Mississippi School for the Blind. The project will put more than $150 million into the old school, located off Interstate 55 North in Jackson's Eastover area, which has been empty since the school merged with the state School for the Deaf, nearby.

"It all goes back to that sense of place and pride in where you liveand the people," Duckworth told the Jackson Free Press in 2006. "I think Jackson is a beautiful town. I feel so fortunate to be in a community like this and to be able to make a difference."

Good job, Ted. This is a great project and will benefit the entire state, not just Jackson. Kudos to you for sticking with this! Keep the faith. David Watkins Watkins Partners

Good choice. FYI, School for the Blind project is not in West Jackson.

Fixed, QB. Not sure how that got in there. Thanks.

Check your research... but Duckworth sold the library a few months ago to first baptist or the baptist convention. Although he means well... from experience I dont have much faith in him when it comes to a project at this scale.

Duckworth had been trying to get Jackson to do something with that for ages. I'm not surprised if he finally unloaded it to First Jackson down there.

I don't want to sound like an apologist for Ted, he is perfectly capable of speaking for himself. As I understand the situation, he ran into problems with securing governmental approval on the use of the library that made the project financially unfeasible. I suspect he took a hit, having invested considerable money on architects, planners, lawyers, historic preservation consultants, not to mention the time and energy that his own staff spent. Too bad the project didn't go forward. It would have been a great way to preserve the old library and have some new "cool" space in downtown Jackson. Also, don't forget that Duckworth was a pioneer in Jackson on doing historic restoration projects, with the $17 million investment in the Electric Building. That was a very risky project for him at the time, but it helped paved the way for others, like the King Edward. Ted really is a warrior for Jackson and I appreciate what he has done for the city. I guess what I'm saying is that we shouldn't be too quick to judge others unless you know all the facts and have walked in their shoes. (at least that's what my mom would say!)

The story has been updated to reflect the correct information. The JFP apologizes for the errors.

I went to the clarion and saw the pics of the presentation. The model is very fine. It's a natural for that interchange and neigborhood. My concern would be Highland Village. Wish Duckworth or POP's would pick that one up. It needs to be "reginned" as we say in the Hotel biz. Still room for phase five up on that surface parking lot. Underground parking and a tower and arcade shopping on top of that. But...back to the issue at hand. Do it!

Here is the presentation video from DDG, the architectural firm responsible for the design. Looks good to me... http://www.ddg-usa.com/Projects/SS-MM_Eastover/Project.html

I didn't know Ted was that young. That's impressive to start your own business right out of college.