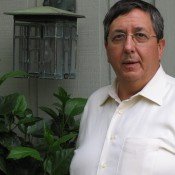 Today's Jackson Public Schools Board of Trustees meeting has been cancelled. Board member Jonathan Larkin, above, voted Tuesday to keep an MSO music program in the schools.

The Jackson Public Schools Board of Trustees has canceled a special meeting today, because "additional information is needed for a recommendation to approve Qualified School Construction Bond Projects," according to a release. The agenda was to include time for public participation "for general comments and/or proposed policy issues."

The JPS Board voted Tuesday to end a 42-year contract with the Mississippi Symphony Orchestra that has provided musical instruction to hundreds of Jackson students every year. Board member Jonathan Larkin, who voted for keeping the $300,000 annual program, called the decision "disgusting."

The board failed to renew the program by a 2-to-2 vote, with members Larkin and Ann Jones voting for renewal, and Delmer Stamps and Ivory Phillips voting in opposition. Board President Sollie Norwood was absent due to illness.

Cancelled? Yeah, I'll bet. Another of those "informal meetings" Mississippi is famous for.

It sounds like panic to me. More time to organize for the parents. They've lost their minds if they think people will back down over this.

unbelievable. With response like this they may as well meet and reinstate the program because the JPS parents ARE NOT PLEASED with such a decision and the school board is supposed to be thinking of the childrens BEST INTERESTS. And if music didnt matter to you, mr stamps or Dr Phillips, that doesnt mean it doesnt matter to MANY other people. And if you think university students are going to have TIME to teach kids for FREE, I think you need to be REMOVED from your positions, because that is pretty irrational and illogical thinking.

This was a COWARDLY decision by the board to cancel this meeting. Parents had organized, emails had been sent to board members, and parents, music instructors & concerned citizens were attending today's meeting to voice their anger and displeasure with the board's decision regarding the strings program. Nobody fell off the turnip truck - this cancellation had nothing to do with the bond program. And they might as well meet and get it over with, because sooner or later they are going to have deal with this issue. I'm disgusted with the incompetence of some of these board members...

This is just another reason that the money needs to follow the child. Parents are the best advocates for their children. As long as the board controls the money, they are in control. We pay the taxes but what do we get for our money? Disrespect and one of the worst school systems in the United States. We need regain control of our money use it to further the education of our children.