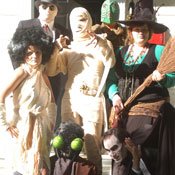 Local actors bring "The Monster Monologues" to life Oct. 23 through Oct. 31 at The Cedars in Fondren.

An unwrapped mummy towers over your seat and keeps inching forward. His voice echoes off The Cedars' walls. His awkward arms stretch out before him. His eyes bug out.

The mummy gets louder as he gets closer. No other sounds emanate in the old house except for his booming threats. He thinks you took his treasure. He reaches out to grab you by the neck as you sit and wait for it. You cannot escape. As he reaches closer, a shiny amulet dangling off his arm catches some light and attracts his attention, momentarily distracting him from devouring you.

Creepy and darkly funny, "The Monster Monologues" is the new full-length play from the Fondren Theatre Workshop that runs Oct. 23 through 31 at The Cedars. Thirteen monsters gather at the funeral of the Fly, all desperate for publicity and jealous of younger, hipper monsters. While they examine their inner demons and ponder career miscues, they also begin to wonder who killed the Fly. They often look at the audience with frightening hunger. Director Beth Kander describes the show as a fusion of theater and haunted-house horrors.

Kander is one of the seven Jackson playwrights of "The Monster Monologues." The others are Brad Bishop, Opie Cooper, Danny Dauphin, Brent Hearn, John Howell and Bret Kenyon. As a group, they brainstormed a general outline for the plot, then divided up the writing.

"It's an opportunity for the monsters to tell their side of the story and air out grievances," said Howell, who also plays Dracula.

The humorous Halloween play features monsters with everyday problems and human frailty. The Blob attempts to make visitors comfortable. A vain Dracula worries about keeping up with younger women. The Creature from the Black Lagoon is one environmentalist not to upset. Frankenstein's Monster doesn't want to be seen as an idiot, but then again he doesn't mean to come off pretentious.

Richard Lawrence plays the Mummy as an old crank of a curmudgeon. With a neat beard and trim glasses, he practiced his part as a loud, overbearing grump without his bandages, then reverted back to a friendly demeanor.

"What do you think of the voice?" he asked Kander.

"It's fine, as long as you don't lose your voice," she said. She can't lose any actors from the crypt this close to the show. A scary incident earlier left the Blob (Lori Kincses) spilled outside the special HazMat container. No monsters were hurt.

The Invisible Man , played by James Wood, stretched in the hallway like a dancer, then paced a small part of the hallway briefly before viewing the body of the Fly, played by Andy Muchin. Wood had to give the eulogy later and even though the character is not always seen, he ran his costume by Kander for her OK.

Every woman plays her part with a different twist and will perform on different days. Both seductive bridesHarper a sorority beauty queen, Barkley a no-nonsense femme fataleflirt with ghouls closest at hand. Young evokes Paula Deen with dripping Southern exasperation; Silberman portrays the same character as a New Yorker meeting a friend for coffee and gossip. Both witches are nurturers who cater to the monster men, yet resent it.

The funeral and wake of the Fly all take place in a funeral home. During the last week of October, The Cedars will transform into that mortuary. The white walls and large, bright modern paintings will fade into a dark set fit for mourning. A coffin will be placed at the front of the largest room in The Cedarsa house smaller than many funeral homes. The intimate space works well with the guerrilla mentality of Fondren Theatre Workshop.

"It's theater in your lap," co-producer Diana Howell said.