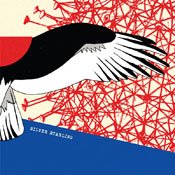 These United States - "Everything Touches Everything"
3 of 5 stars

When I first popped in the latest album from Washington, D.C.-based These United States, "Everything Touches Everything," I thought I was listening to the next big thing. Their opening track, "I Want You to Keep Everything," has all the makings of a great song. It's bursting with vitality and catchy melodies and showcases a pure American rock sound that's solid but unpretentious. It's impossible not to shake your hips, sing along, and form a smile as pulsing bass meets precise driving drums and crystalline guitar jabs.

Unfortunately, as the album moves forward, it devolves into a loose series of generic alt-country jams. Most of the remaining songs are decent efforts, but they lack the depth necessary for repeated listens. Among these, a few songs stand out: the jangly, rhythmically punchy tune, "Everything Touches Everything," and the clever marriage of country flair with kaleidoscopic pop in "Conquest and Consequence," but even these tracks pale next to the album opener.

It's hard to tell if These United States just got lucky with the first track, or if a great album is in their future. Either way, I'll still be singing "I Want you to Keep Everything" for years to come.

There must be something in the water up in Montreal. They churn out musicians and complex melodic pop songs like it's as easy as breathing. Case in point: new band Silver Starling.

Their fall 2009 self-titled debut, "Silver Starling," is a haunting and meticulous album that shows the influences of the local scene and showcases an original and captivating sound.

Whether proffering rain-drenched songs of unhappy reflection or dark and moody tracks infused with the sharp jabs of post-punk, Silver Starling is thoughtful melancholy through and through. My favorite tracks showcase the band's talent for conjuring complex emotions. In the opener, "Something over Nothing," singer Marcus Paquin's wavering voice pleads with a lover to "Come Break My Heart" over a wash of crystalline guitar chords, softly rolling drums and fluid strings. In contrast, the dark and passionate "Blind" shows its feelings in jagged guitar and cloudy noise. But it's the slow and aimless "Blue Light"with its contrast between raw, vulnerable vocals and dramatic atmospheric crescendosthat shows the band's emotional depth.

The Raveonettes - "In and Out of Control"
2 of 5 stars

The Raveonettes, a Danish band, have developed a knack for cleverly mixing sunny pop songs with heavy distortion. Unfortunately, on their latest album, "In and Out of Control," they drop the noise for an unbalanced mix of twee pop tracks and noir pop. Despite some solid tracks, the similarity of each song makes the album distressingly repetitive. The noir-styled tracks even seem to use the same winding bass riffor slight variations thereofas each song's central instrumental theme.

The best tracks on "In and Out of Control" are the most complex. "Gone Forever" begins with a fuzzy sound like a static-heavy TV signal that morphs into a well-structured and catchy mix of surf-guitar solos, melodic guitar chords, coy vocals and more guitar fuzz. "Heart of Stone" is classic noir, and though it features the album's familiar zigzag theme, its precision and rhythmic layering make it stand out.

Still, even the best songs on "In and Out of Control" don't bring anything new to the table. Their approach varies only slightly from singles on older albums. They may still manage a couple more radio hits, but personally, I'm ready for this Copenhagen-based band to learn some new tricks.