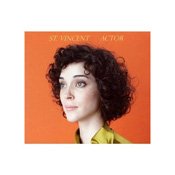 Brooklyn musician Annie Clark's debut was one of 2007's best albums. The album—released under the name and title "St. Vincent"—showcased a unique blend of narrative pop and distorted guitars with confidence and sincerity. Her follow-up effort, "Actor," takes a significant aesthetic leap into classical territory, featuring heavily layered, rhythmic songs. These characteristics help maintain consistency among a diverse blend of songs.

"Actor" shows its strongest hand in complex guitar-driven songs. "The Neighbors," for instance, alternates between a wandering, uncertain verse and bridges of strident guitar strums. "Actor Out of Work" instantly attracts with a driving beat, fuzzy guitar style and sardonically charming melody. "Marrow" showcases a strong, funky bassline that provides the dance backbone to the song's constantly zig-zagging industrial guitar lines. Also noteworthy are "Just the Same But Brand New" and "The Party." Both are quiet songs with a genuine vulnerability that overrides Clark's normally strong, clear vocals.

Unfortunately, many of the other tracks on "Actor" are tepid and impassive despite their exquisite craftsmanship. Ultimately, the album lacks the emotional resonance and intimacy that made St. Vincent's debut so striking, and no amount of musical craft or creativity can make up for it.

Winter Gloves - "About a Girl"
3 stars

Winter Gloves may be the danciest band to come out of Montreal in recent years, but they have more in common with their art-rock neighbors than trendy dance bands.

The album's best songs successfully fuse these elements. "Invisible" has an organic sense of movement without being overtly funky. Bell-like guitar weaves in and out of crackling bass lines in simple, but rhythmically smart movements. The slightly darker "I Can't Tell You" clearly takes cues from Wolf Parade. The song mirrors Wolf Parade's proclivity for brooding keys and sweeping structure, but its catchy chorus keeps the sinister elements in check.

Not every song on "About a Girl" is good, and their failings usually lie when they veer too far in one direction. Some songs are a bit too breezy while others hop around so much they lose focus. Overall, though, "About a Girl" is a solid debut from a city with a great track record for producing talented musicians.

Camera Obscura's "My Maudlin Career" is a lush pop album with '50s ballad influence. Every aspect of the record, from production to vocal affect to the music itself, has an old-fashioned, nostalgic feel. The album alternates between sad country ballads and breezy pop numbers with sing-along melodies.

Camera Obscura does a great job of conveying the inherent longing and loneliness of both genres, and only occasionally does the album veer toward the maudlin attributes suggested by its title. The melodies are strong and consistently compelling, but the music is too often wandering, tepid or filled with self-important and gratuitous orchestral flourishes.

The album's best songs are different, but successfully match great melodies with strong instrumentation. "French Navy" is a sunny but lyrically sad track with wavy guitar riffs and a catchy, strong chorus. "Forests and Sands" is a slow country ballad with bittersweet pedal steel and heartfelt vocals.

While parts of "My Maudlin Career" are good, the album is average. And while it's a decent diversion from today's hyper-digital pop music, it's more likely that listening to this album will provoke you to explore original '50s artists rather than purchase the CD.