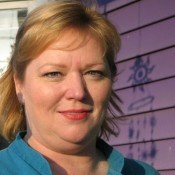 Before Byron Knight opened Sneaky Beans coffee shop on North State Street in Fondren, just about a year ago, the little house was home to Karen Parker's store, New Vibrations, for more than four years. The aroma of coffee has now replaced the scent of incense, but for the former denizens of Parker's store, the space will always have a slightly purple tint to it.

On Nov. 19, Jackson can welcome Parker, a native Jacksonian, back to the world of retail with the grand opening of Rainbow Fair Trade Handicrafts and Rainbow Green Services in the former Fondren Traders space at 2807 Old Canton Road, Suite A.

"I'm going to be co-managing," Parker says. "Originally, I was going to be manager, but because we want it to be a fair-trade store and a green store, an eco-friendly store, when we started looking at people (to manage the green services) ... we found this wonderful young woman named Katherine West. ... I suggested that we co-manage."

That inclusive attitude is typical of Parker, 52, and one of the ways she will make patrons feel welcome and at home. West has experience working for organic farms and eco-villages, according to Rainbow CEO Luke Lundemo.

Hired only about a week ago, Parker is working feverishly to get everything ready. "I'm working fast and furious to get it done, to take advantage of the wonderful opportunity that Fondren gives us by having (Fondren) Unwrapped," she says, adding that she's enormously grateful to the Lundemos for the new opportunity. She's working toward opening the doors Nov. 1, although the grand opening will be Nov. 19.

"We'll be getting things from across the world," Parker says when asked about the handicrafts the store will sell. "Our mission is to be much more diligent than I had to be (at New Vibrations) to make sure that these products actually are fair-trade products and that they do benefit the communities that make them, and that they don't harm the environment when doing so."

The store will also feature products to help people live a green lifestyle, stocking items like composting bins and worm bins. "Things that encourage people to be green in their own homes," she said about that aspect of the new venture. Rainbow Green Services will also hold green classes and do consulting work.

This Friday, Oct. 23, from 9 a.m. to 2 p.m., the store will sign folks as charter members of the Green Team. The goal for the project is to show people how even small efforts make an impact on the environment through energy savings: "Everything from growing organic food, to recycling to using energy-efficient products in your home," Parker says. The Team's collective efforts will be entered into a computer program, and a computer screen will display the resulting energy savings, updating them frequently.

The new store is "putting your money where your beliefs are," Parker says, adding that she's also exciting about reconnecting with some of her former customers. "I have missed everybody, all the friends I made at New Vibrations," she says, and invites all of them to come see what Rainbow Fair Trade has to offer.

Go Karen and Katherine and Living Green and Fair Trade and Lundemo and Rainbow. Terrific! It will be so good to have Karen Parker back in the middle of Fondren.

second that! Karen P. is an amazing, friendly & wonderful person. And we need this business to help us get to better green living...composting, gardening, household stuff. And gifts from fair trade communities around the world. I know where I'll be doing my holiday shopping!!!

Me, too, Izzy, regarding the holiday shopping.