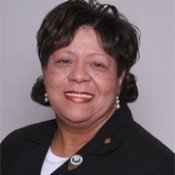 Mary Hill, executive director for the Jackson Public Schools is one of three "Women of Strength" being honored at tonight's fundraiser.

First impressions may never be more important than when a job applicant walks into an interview. For many women, learning how to make a good first impression and then maintaining a professional demeanor on the job can mean moving from poverty to economic self-sufficiency. That's the goal of Dress for Success, a nationwide non-profit organization that works with disadvantaged women, providing professional attire, support and career development tools.

The metro Jackson Dress for Success affiliate has worked with more than 1,400 Mississippi women, allowing them to thrive in professional environments. Tonight, the group is holding its annual fundraiser, "Little Black Dress," with a gala event honoring three Jackson area "Women of Strength" and Habitat for Humanity Metro Jackson.

"This is simply a tremendous honor, and such a positive, needed cause," Ladd said. "It was the best surprise ever. I hope everyone joins us tonight."

Individual tickets for "Little Black Dress" are $40, which includes dinner and entertainment. For more information, go to the Jackson Dress for Success Web site or call 601-985-9888.

Congrats Mary! You deserve this and much more. Mary has worked tirelessly in the community to help young girls become all that they were meant to become!

I second your vote lanier77. Ms. Mary Hill has worked tirelessly in the community with not only young girls but for the community at large. I remember how attentive she was to my father-in-law who was one of the Superintendents of Education for Jackson Public Schools. He was also the first Superintendent of "Colored Schools". The two of them worked closely together and now she has put our school system on the map for developing a healthy meal plan for our schools. This is BIG! This great lady, Mary Hill, also did so many kind things for my father-in-law during his fight with cancer and later died. I hope Ms. Hill reads the JFP because I never made the time to formally say, THANK YOU!