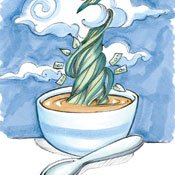 In the current economic crisis, many of our friends, familyor maybe you or Ihave lost jobs or are facing layoffs. Despite this unfortunate downturn, people still have to eat. After living on a budget for many years, I have learned valuable lessons about stretching my grocery money. One of the ways I have been able to do so (and still entertain a dinner party) is by making hearty soups and stews that I can eat for several days or freeze and look forward to for weeks.

Soup goes hand-in-hand with chilly spring days like cold beer does in summer. Stock your pantry with simple ingredients for a quick soup (some ideas include canned tomatoes, bouillon cubes or broth, dried beans and canned vegetables) until spring comes into full bloom. Because I do not eat a lot of meat, and because most of my friends are faux vegetarians ("I'm vegetarian most of the time until I decide to eat that turkey sandwich"), I tend to use a lot of protein-laden beans and lentils in my soups.

Most people are familiar with split-pea soup, but a few years ago, my sister introduced me to using red lentils in place of green or brown ones. When I made a soup with the red lentils, it cooked down to become a stew that, despite having absolutely no dairy products in it, tasted rich and creamy as though it were cooked with heavy cream. The good news about red lentils is that you can purchase huge bags for only a few dollars from Indian grocery stores, such as Spice Avenue or the Patel Brothers' store. You can also find red lentils at most other grocery stores around Jackson. Aside from being inexpensive, lentils are healthy because they contain high levels of protein and iron, two essential parts of your diet.

Another excellent source of protein and an inexpensive purchase are chickpeas, also known as garbanzo beans. I make large pots of vegetable soup every other week to refrigerate or freeze and have been replacing potatoes with chickpeas. They give a nice crunch to the soup that otherwise has a lot of green vegetables and tomatoes and satisfies the hearty factor I crave. You can also find chickpeas at Indian grocery stores, but they are easy to find at McDade's or Kroger, too. Buy them by the bag or get the canned ones. Either way, you have a healthy addition to your soup.

A last bit of advice about making soup: spices. While salt and pepper are our standby spices, don't be afraid to toss some of that dried rosemary into the pot or experiment with cumin. Oregano, thyme and basil are also delicious ways to give your soup a little more depth, whether including meats or just vegetables.

Heat oil on medium heat in a large pot and add diced onions and garlic. As onions begin to soften, add celery and carrots. Cook for a few minutes, stirring to prevent browning. Add salt, pepper and cumin. As vegetables soften, add lentils and stir quickly to coat. Follow with broth and stir all together. Bring mixture to a boil, then cover and lower heat to low. Cook for 20 to 25 minutes, then uncover and stir. Remove half of the soup and blend in a food processor. Return the pureed mixture to the pot, stir and cover again to cook for another 5 to 10 minutes. I typically serve red lentil stew with corn muffins made with cheddar or Colby Jack cheese and green chilies.

If I lived in Tupelo, I'd be eating cheaply by buying take-out tamales and tacos (tacos are 4 for $5; tamales are $1.25 each) at the window outside of the Speedy Gonzalez E-Z Stop at 1725 North Gloster Road. I had some of those last week and it is all I can think about. Is there any decent Mexican food in Jackson? And don't point me to that place on Fortification. Same old glop you get everywhere. This place in Tupelo had fresh onions and cilantro spread all over the taco and was accompanied by fresh limes and homemade red and green salsas. The chicken tamale was one of the best things I've ever eaten. I wonder if the owner can fed ex those babies to Jackson?

The La Cazuela menu (on Fortfication) has plenty of glop, but you can get some pretty good and authentic meals there if you stay away from enchiladas etc. Try the chile verde...pork braised in a spicy tomatillo sauce.

Will do, thanks. Just wish I could get some simple and delicious tacos like the ones served at that gas station in Tupelo.

I love those enchiladas at La Cazuela's! Actually, I love enchiladas from any Mexican place. If you're willing to go out of the way a little, there's a place in Flora called Los Molcajetes which is very good.

Neola's recipe is a different order of cheap. The whole thing probably cost less than 4 tacos, and it feeds at least 4 people instead of 1. I saw a Depression-era cook whose You Tube videos are very popular. Her grandson thought people would be interested in learning how to feed a family for almost nothing. Her secret is pasta every day. It's not so difficult to do. I routinely prepare gourmet-style meals for no more than 1 1/2 to 2 dollars per person. I have to echo Neola's advice about spices. When I was trying to stock my kitchen, I would buy a new spice every week. It didn't take long to build up such a variety that I can make a chicken dish from a different country every night for a week. Also, in most countries' cuisines, meat is used sparingly as a flavoring. This means that you can budget only 1-2 ounces per person instead of 3-4. They say that the economic crisis is swaying people to try more at-home cooking. Once you get the hang of it, it's fun and creative. You just have to feed someone who will clean up after you. Neola, I think your stew would be great with a little sour cream and salsa as a garnish!