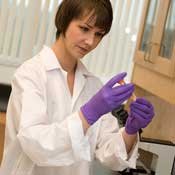 Mississippi Rep. Tommy Reynolds, D-Charleston, spoke for the University of Mississippi Medical Center yesterday, saying the teaching hospital has never and never plans to do stem cell research, according to WAPT.

The full state legislature will negotiate the final state budget this month.

UMMC is Mississippi's only teaching hospital.

Scientists at the National Institutes of Health have been long-time advocates of stem cell research, which "have the remarkable potential to develop into many different cell types in the body," according to the NIH Stem Cell Web site.

"Research on stem cells is advancing knowledge about how an organism develops from a single cell and how healthy cells replace damaged cells in adult organisms. This promising area of science is also leading scientists to investigate the possibility of cell-based therapies to treat disease, which is often referred to as regenerative or reparative medicine"

The organization acknowledges that research "on one kind of stem cellhuman embryonic stem cellshas generated much interest and public debate."

Some people in the pro-life movement, believe that human life begins at the moment of fertilization, and that using embryonic stem cells in researchwhich destroys themis the same as murdering any other human being.

On the other side of the issue, researchers believe that stem cells can potentially save countless lives, promising treatment and cures for a myriad of medical conditions from reducing transplant risks to healing spinal cord injuries and birth defects.

Researchers typically use cells extracted from surplus frozen embryos left over from in vitro fertilization procedures performed at fertility clinics, according to the NIH and other Web sites debating the ethical issues, including the Religious Tolerance site. Those cells are frequently discarded.

Isn't this the same kind of foolishness we heard years ago when the first heart transplant was performed at UMC???? There are a lot of people from all over the country who use our hospital because of its cutting edge position on so many medical areas. Former First Lady, Mrs. Bush just had a turkey part placed in her chest for one of her heart valves. Maybe we can give the turkeys a break once we can use human cells. LOL !!! Yet serious.

Why do our lawmakers continue to keep us in the Dark Ages? We could end up being the very last state to do stem cell research at our public universities.

When then candidate Barack Obama answered the question about when life begins at the Saddleback debate a lot of people said that he hedged. But I thought he gave the best, most honest answer when he said that he couldn't know, it was "above his paygrade." I don't think we can know with the technology we have available today. It's the single most troubling part of the whole abortion question to me. I can, however, draw distinctions between a frozen embryo and a baby. Especially if these embryos are about to be discarded. Why shouldn't they be used in research that could possibly save lives instead of being tossed in the waste basket? Maybe scientists, through further research with those cells and embryos, will finally be able to answer the question of when life does begin. Good question Golden Eagle, it's hard to lead in any field when our thinking is still in the middle of the last century.

So ridiculous. I have a personal stake in this, as stem cell research could lead to a cure for our daughter's type 1 diabetes. I would love to see a cure in my lifetime, but definitely in her lifetime. Sadly, golden eagle, I can see us as being the very last state to do stem cell research. Maybe would be a close tie with Georgia and Alabama. Mississippi needs to step up and be one of the first, not the last.

I saw Ronald Reagan on D.L. Hughley Show last night. He gave some interesting information re stem cell research. If people with little information would only be willing to listen, I think that the resistance would decrease. Also, Nancy Reagan pushed very hard and continues to speak out for this research. Her great hope was for stem cells as an intervention for alzheimers.

The University of Ark's Mutiple Myeloma Institute for Research and Therapy does research on adult stems cells. I have had a stem cell transplant for the treatment of my mutiple myeloma using my own stem cells. There's a couple of million of my stem cells frozen there if I ever have another transplant, that will be used for research after 10 years.