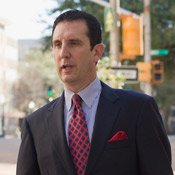 Attorney John Reeves will argue on Wednesday that Mayor Frank Melton should be allowed to run as a Democrat.

Following a federal judge's decision yesterday to hold Mayor Frank Melton's retrial in Jackson, with a jury from the Gulf Coast, Melton has filed a motion to reconsider the ruling. The Gulf Coast is disproportionately white, the mayor argued in a motion (PDF) filed today.

Drawing on case law that says a jury should be drawn from a "fair cross section of the community," Melton argued that the Southern Division of Mississippi's Southern District, where Judge Dan Jordan plans to conduct jury selection, has a higher proportion of whites than the District as a whole. Melton said that the Southern Division's is 82 percent white and 16 percent black, while the entire District is 57 percent white and 41 percent black, according to 2000 U.S. Census data. Judge Dan Jordan should draw potential jurors from the entire District, the mayor argued.

Jordan called jurors from across the Southern District for Melton's first federal trial, which ended Feb. 24 with a hung jury. Prosecutors requested that the jury pool for the retrial come exclusively from the Gulf Coast, where they would be least likely to have heard about Melton or his previous trials. They did not did not address the jury pool's racial composition in their request. Melton contended in his motion that the Gulf Coast's relative lack of exposure to past trials was not sufficient reason to draw an un-representative jury.

"The government failed to show by any evidence that potential veniremen have been unduly influenced for or against either side by any media coverage," Melton attorney John Reeves wrote. "In short, all the government has shown is that there was coverage, but it showed no prejudice to its position by that coverage."

Reeves also asked Judge Dan Jordan to reconsider his decision to hold voir dire jury questioning in Gulfport. The costs for travel and accommodations in Gulfport would be "unduly burdensome" for the mayor, Reeves said.

"Defendant Melton is innocent until proven guilty," Reeves wrote. "It is unfair to force him to unduly bear any additional costs of his own prosecution."

Reeves also suggested that travel costs for the government's attorneys, paralegals and investigators would fall on the taxpayers. In his initial ruling on jury selection, however, Jordan acknowledged a high cost to not holding voir dire questioning in Gulfport.

"Conducting voir dire in Jackson would require a large panel of residents from the southernmost part of the district to travel to Jackson and remain there until jury selection concludes," Jordan wrote. "The resulting cost to taxpayers and inconvenience to the potential jurors would be substantial."

Jordan has scheduled a retrial for May 11. Prosecutors allege that Melton and his former bodyguard Michael Recio willfully violated the Constitution in conjunction with the Sept. 2006 destruction of a Ridgeway Street duplex.

whatever... its white people that will set him free. This time he will get not guilty verdict.

I got to agree with you Concerned. The white people I talked to that don't live in Jackson were happy that the Mayor keeps dodging the bullet. They were, that is, until I questioned whether or not they thought it was ok for the Mayor of their town to come tear down their house without any due process if someone merely accused them of dealing drugs. Then they crawfished a bit.

After the hung jury I wondered of the jury members that voted "NOT GUILTY" where they lived? I suspect the two hold outs live in the affluent suburbs of Jackson... such as Madison, Ridgeland,Flowood, or Brandon.