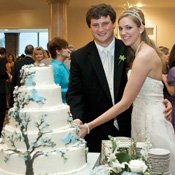 Mississippi State University senior, Price Donahoo was working in the library when sophomore Laurel Miller sat down at the computer across from him.

"I'm sure she busted me looking at her a couple times," Price says. Later, he asked a mutual acquaintance to play matchmaker at a party.

"She introduced us to each other, and then just walked off and left us, which was really awkward," Price says, laughing. "I found out a few months later that (Laurel) was dating somebody else, so I thought, 'You must have blown it with that one.Ҕ

A couple of months after that, Price saw Laurel at another event and found out that she was newly single. He re-introduced himself.

"I was with some friends, and he was just making us laugh for the longest time," Laurel says. "I thought, 'This guy is really cool.Ҕ

"We finally went out on a date, and never looked back," Price says.

The Proposal
Fast forward three years to July 2008. Price was then a law student at Ole Miss, while Laurel was an executive assistant at Summerhouse Style in Ridgeland. The long-distance couple talked about getting married the summer after Price's graduation the following year.

Laurel's family invited Price to join them on vacation to New York City, which he decided was a perfect location to propose. He picked out an oval diamond ring, asked for the approval of Laurel's dad, Leewhich he happily grantedand made a few calls ahead to New York.

On July 3, 2008, Laurel wanted to eat at her favorite New York restaurant, the elegant Tavern on the Green, but Price told her it was booked. He said that he'd made reservations at Sparks Steakhouse insteadthe site of a famous mob assassinationwhich Price, a fan of mafia movies, found intriguing. This wasn't what Laurel had in mind, but she indulged him.

Price had arranged for a carriage to pick them up before dinner. What Laurel had thought would be "a random carriage ride" to a mob hangout was actually a romantic trip through Central Park with roses and champagne.

The driver stopped at the secluded Cherry Hill Fountain, where Price had hired a saxophonist to play the couple's song, "Stand by Me." As the sun set, Price got down on one knee and proposed.

"I was so nervous that I put the ring on the wrong hand," says Price, who took Laurel's right hand instead of the left. Laurel, of course, said yes.

The carriage then took the couple to Tavern on the Green, where Price actually did have reservations. After dinner, the couple met up with Laurel's family and shared their news. They decided to be married on Saturday, May 23, 2009.

The Details
The couple chose a bird theme for the wedding. On her computer, Laurel designed her own Save the Date cards and printed them at home.
Her mother, Mary, hand-addressed 800 invitations, estimating that 600 guests would attend.

Laurel and her mother designed the centerpieces and favors (see sidebar), and hand-selected gifts for the bridesmaids and flower girls: antique brooches. Village Beads strung them with freshwater pearls for the ladies to wear during the wedding.

The Ceremony
On May 23, a rainy Saturday, the pews of the Woodland Hills Baptist Church in Fondren filled with guests as an orchestra played. The stained glass windows glowed as the groom and the best man, his father, approached the altar with the pastor. Ten attendants for each side found their places.

The music changed, and the guests stood and turned to see Laurel's entrance. Six feet tall and stunning, she wore a tiara and a floor-length strapless ivory dress with beading and lace, both from A Bridal Path.

After scripture readings and an exhortation by the pastor, Laurel and Price, both smiling, exchanged traditional vows and their rings. Afterward, as they stood at the altar facing each other, two vocalists sang "I Can Hear Your Voice" by Michael W. Smith. During the song, the couple laughed and chatted comfortably as if they were alone instead of in front of hundreds of people.

When the pastor presented the Donahoos, Price and Laurel kissed, and their guests applauded. The orchestra burst into a joyful Gaelic recessional, a tribute to Price's Irish heritage, as the grinning bride and groom left the church. A bright red stretch limousine, one of only eight in the country, was waiting to carry them to the reception.

The Send-off
Strains of bagpipes, hanging paper lanterns, and Mary's three black Scottie dogs greeted the newlyweds and their guests as they pulled up to Jackson's Colonial Country Club. Inside, guests helped themselves to the buffet that included chocolate fondue and fried catfish from Price's hometown of Belzoni.

Laurel and Price cut their cakes, which stood on wooden stands made by Laurel's brother. The wedding cake had five layers, white with fondant birds and branches twisting around the sides. Price's chocolate-iced three-layer cake was decorated with shotgun shells because he enjoys hunting.

The talented Memphis cover band, Almost Famous, kept guests young and old dancing all night. Laurel and Price took a break from greeting their guests to dance to energetic songs like "Bohemian Rhapsody." Around 10 p.m., one of the band members asked guests to go outside to see off the newlyweds.

Laurel had known that her family had a final surprise for her, and it turned out to be a horse-drawn carriage like the one from the night of her engagement. She and Price beamed as they left the reception, ducking as their guests tossed birdseed at them. As a light drizzle fell, they stepped up into the carriage. The driver slowly pulled away, sending them off toward their week-long honeymoon in Belize.

• Wildflower seed paper
Laurel ordered handmade, eco-friendly paper through http://www.botanicalpaperworks.com, which will bloom into wildflowers when planted. Using her computer's printer, she added the image of a tree and a Bible verse.

• Pocket-sized bags of birdseed
Laurel bought small muslin drawstring bags online, stamped them with a bird image and filled them with birdseed, which guests tossed at the couple as they left the reception.

Laurel designed table centerpieces from ficus trees, which she bought at Green Oak Nursery and replanted in attractive pots. Wendy Putt from Fresh Cut filled the base with flowers and hung votive candles and paper birds from the branches. Laurel made the 65 birds from cardstock and wallpaper, using a template from Domino magazine's Web site.