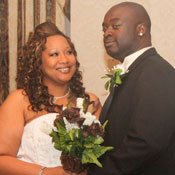 Brad Franklin and Funmi Folayan Spencer were married Sept. 1 in a rose garden at Jackson Place.

Over a period of eight years, Funmi "Queen" Folayan Spencer and Brad "Kamikaze" Franklin realized that they were as good for each other as they are for Jackson.

Brad and Funmi, both Jackson natives, are a power couple deeply involved in their community, and each wears many hats. Brad has toured the world as a hip-hop artist, and he is a leader in Watkins Partners' revitalization of the historic Farish Street Entertainment District.

Funmi, an alumna of Tougaloo College, is the founding president of SIPPI Inc. (Sisters Increasing Positive Progression Inc.), a diverse community group that addresses issues of importance to women. She is a board member of the Jackson Progressives, a blogger, a writer for the Jackson Free Press and on the committee for the annual Chick Ball fundraiser to help stop domestic violence in Jackson.

'She Was My Ideal'
In 2001, Brad experienced love at first sight when he saw Funmi leaving the house of their mutual friend, DJ Tim "Phingaprint," Washington.

"She was my ideal," Brad says. "If I had a chance to draw up a woman by my specifications from scratch, she was it."

Phingaprint, a protective friend who saw Funmi more like a sister, wouldn't reveal any details about her, but Brad knew that he would run into her again. A few months later, he saw her at the Jackson Music Awards.

"I walked up to her, and I asked if she would marry me," says Brad, who had never spoken to Funmi before. "She kind of smiled and giggled, and she walked off."

"It was just very sincere to be a one-liner," Funmi says about his first proposal.

After that first brief connection, they lost each other in the crowd. But fate seemed to intervene again for the couple. They ran into each other later that week at a crowded club that each of them normally avoided, and they finally exchanged numbers.

The couple began dating during a rough patch for Funmi, when she was struggling financially and living at her family's home. After some ups and downs over five years of dating, Brad and Funmi separated for two years. However, when they both began working closely with the Jackson Progressives in spring 2008a group Brad co-founded that seeks diverse, positive leadership in the citythey got back together. That time it stuck.

Last New Year's Eve, Brad and Funmi were staying at the Hilton Jackson for an event he was hosting to benefit the Blair E. Batson Hospital for Children. On their way out the door, Brad stopped Funmi and said, "Wait a minute, you're not finished with your outfit."

He got down on one knee, held up a diamond ring in a platinum setting and asked Funmi to be his wife. After several minutes of trying to catch her breath, she said yes.

A Family Affair
Brad and Funmi had planned an October wedding, but in July, they had a surprise: They were expecting a baby girl. They decided to move the wedding date up, plan a small ceremony and hold a larger reception in October.

"It was getting to the point where I had 100 people that I didn't even know on my guest list," Funmi says. "We didn't want it to be a show."

On Sept. 18, 30 immediate family members and close friends gathered at dusk in the rose garden outside The Pinnacle at Jackson Place, the newest building downtown.

Through Brad's business relationship with Leland Speed, CEO of the Parkway Properties Group, he was able to reserve the space for the ceremony.

"We were the first wedding there," Brad says. Because he has been such as advocate of bringing back downtown Jackson, this honor meant a lot to him.

From start to finish, the Spencer-Franklin wedding affair was a collaboration of their loved ones.

Wearing an ivory halter dress with a belted waist, Funmi walked in to an original song written and performed by McAfee, a musician friend of the couple. Funmi styled her own hair, and a friend applied her makeup.

Afterward, about 35 guests celebrated with the newlyweds at their home in North Fondren, where Funmi's godmother, Sharon Turner of S&T Wedding and Party Planners, decorated the home with silver and black decorations and prepared entrees such as crab and seafood salad.

Three weeks later, on Oct. 11, Brad and Funmi's reception took place in the penthouse of the Hilton where Brad had proposed.

During a brief processional, Funmi's son, RhoShon and Brad's son, Julian, held candles to represent Funmi's father and Brad's mother, who had passed away. Brad's daughter, Brandi, held a unity candle that symbolized the two families coming together. Using the colors of the African flag, Funmi's candle was red and black with a green ribbon.

Rev. Adams led his sister and her new husband in The Partaking of Spices, asking them to offer each other tastes of lemon juice to symbolize sorrow, vinegar for bitterness, cayenne pepper for passion and honey for sweetness.

"It's an African tradition from the Nigerian Yoruba tribewhich is the tribe where my name comes from," Funmi says. "It prepares you to embrace marriage as a whole."

Funmi's best girlfriendswho call themselves "the chicas"pitched in as hostesses and servers at a buffet table that included southern food like biscuits and honey-glazed wings. After the meal, a steady stream of family and friends gave heartfelt toasts, including several of their children, which left the bride and the guests in tears as one after another stood up, recited their love and faith in the couple, and playfully threatened to hurt the one who hurt the other. The toasts took nearly an hour, and left few dry eyes in the room.

The couple's children gave an especially meaningful toast that affirmed the couple's union, with Brad's daughter saying Funmi had always been like a stepmom to her, and Funmi's son telling Brad how much he was looking forward to being part of his life.

"It was very touching. That was the part that broke both of us," Funmi says.

Brad and Funmi decided to forgo a honeymoon to prepare for the March arrival of their baby girl, whom they have already named Bralynn Jamila.

Wedding CDs: Funmi and Brad chose songs such as "I'll be Loving you Always" by Stevie Wonder and "I Need Love" by LL COOL J that meant something special to them, and local musician Drumma Boy of TraXtar Records (601-502-5581) collected them onto CDs.