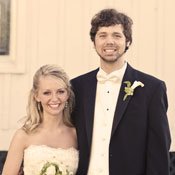 Six weeks after Dustin Jernigan and Caroline Ware went on their first official date in January 2009, he took her ring shopping.

It wasn't as if they had just met, though. They have known each other since 2007 when she was still attending Northwest Rankin High School. After Dustin graduated from the University of Mississippi that year and then attended the Reformed Theological Seminary in Jackson, he went to work as a youth intern at her church, Lakeland Presbyterian Church. They became good friends; after she began studying art and pre-nursing at Belhaven College, she would sometimes meet up with Dustin at Cups Fondren to study or work, and once they went to the Mississippi Museum of Art together.

During the last year, though, that friendship turned into romance, as they discovered how many interests they share: their faith, love of simplicity, the outdoors and supporting the community.

Even on that first trip to a jeweler, they vowed to support a local merchant and to find a one-of-a-kind ring that reflected their value of simplicity. They found what they were looking for in Joel Clarke, a local jeweler who designed a tasteful diamond ring according to their specifications. A fellow Presbyterian who sympathized with the young couple's limited finances, Clarke also gave them a generous discount.

To propose, however, Dustin decided to go far beyond the metro. His family had invited Caroline to join them on a May trip to England's countryside. Midway through the 10-day trip, Dustin and Caroline went to Stratford-upon-Avon, Shakespeare's hometown where he had courted his wife, Anne Hathaway, whom he married in 1582. The couple walked to the church on the River Avon and sat down on a brick wall next to the river, surrounded by weeping willows.

Dustin had studied literature in college and was in the habit of reading to Caroline. He pulled out a copy of Shakespeare's sonnets and began reading, "Shall I compare thee to a summer's day?"

As Dustin concluded, "So long as men can breathe or eyes can see, so long lives this, and this gives life to thee," he took Caroline's hand. With tears in his eyes, he got down on one knee, took out a wooden African boxa tribute to Caroline's travels to Africa and their shared plans for mission work in the futureand asked her to marry him. She said yes, and began to cry.

Caroline and Dustin were young and didn't have a lot of money, as Dustin was a still a youth intern and Caroline a college student. They set a modest budget for the wedding$2,000, to be exactand decided to have a simple, homegrown event.

Fortunately, because Dustin and Caroline were valued and active members of Lakeland Presbyterian, their friends and fellow church members all pitched in to help, and even donated anonymously to the event. The couple received discounts and donations for nearly everything they needed: flowers from family friend Cathy Sluke, for example, and coffee from Seattle Drip on Grant's Ferry Road, where Caroline had been a barista.

The couple chose a Saturday morning for their wedding, when the church wasn't in demand, in order to celebrate their favorite meal of the day: breakfast. This also kept costs low because they didn't need to provide alcohol at a reception. Because Dustin is on staff, they could use the church free of charge, and church members offered to cater the breakfast. Church member Robin Edwards designed the invitations and paid for postage, and she volunteered to provide a grits bar for the reception. The grits bar served a variety of flavors including butter and cheese grits.

On Aug. 8, 300 guests of all ages packed into Lakeland Presbyterian. Friends had decorated the church with orange and white roses, calla lilies, and hydrangeas on pedestals, and live instrumental music, including violins, drums, guitars, and piano filled the room, provided by Belhaven College students.

The wedding party processed in, the bridesmaids in satin, knee-length navy dresses, and the groomsmen wearing their own suits. Dustin stood at the altar, craning his neck to see his bride come through the church door.

Caroline walked up the aisle toward him, wearing a white strapless dress from Center Stage Formals. She couldn't stop smiling as she took her place next to Dustin. During the ceremony, the couple laughed and whispered to each other. They said their vows, received thunderous applause from the congregation, and left the church to Coldplay's upbeat "Life in Technicolor ii."

The guests streamed into the Family Life Center, the multi-use room behind the church, to eat brunch. Breakfast included fresh fruit, muffins, and a blended coffee and ice cream frappé. Members of the youth group walked around taking plates and serving food. Church member Raynor Edwards had volunteered to do all the dishes, even if it took all night. The feeling of celebration and community was palpable.

Shortly after their wedding, Caroline and Dustin left for their honeymoon: three days in a family cabin in the Smoky Mountains of Tennessee and five days camping in North Carolina in a tent that the youth group gave them as a wedding gift. The outdoorsy newlyweds wanted something simple but beautiful, just like their wedding.

Accents
Creative Cakes on a Budget:
Caroline and Dustin took a chance on Chimneyville Restaurant, which had just begun offering wedding cakes and was able to work with their small budget. They were thrilled with the results. Dustin, an Ole Miss graduate, had a chocolate cake in the shape of Ole Miss' football field, complete with the traditional Ole Miss script in the center. Caroline's three-tier wedding cake was topped with two strawberries frosted to look like a bride and groom.

Socially Conscious Kicks:
Both Caroline and Dustin wore Tom's Shoes, which donates one pair to a child in need for every pair bought. This year, the company plans to give 300,000 pairs to children around the world, who often depend on walking for transportation.