[Rob In Stereo] Not Loud Enough 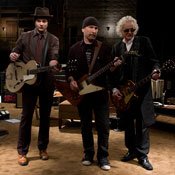 Rock guitarists Jimmy Page, The Edge and Jack White star in the rockumentary, "It Might Get Loud," in theaters next month.

You need three main ingredients to make a great rock documentary: great music, lively stories and musical emotiveness from those playing. Viewers should feel the artists' joy and urgency emanating from the screen. Never should we pick up on the fact that these musicians have played these songs hundreds of times in their careers. It is this element that separates the good but forgettable rock documentaries from the classics.

"It Might Get Loud" has the premise of a potential classic. Three guitar icons from the past four decades, Jimmy Page (Led Zeppelin), The Edge (U2) and Jack White (The White Stripes, The Raconteurs) sit down together to discuss their instrument and their musical philosophies, all culminating in a jam session. Splice in some autobiographical interviews and concert footage, and it is a can't-miss proposal.

The film generally works. Great music predictably abounds as the filmmakers dig up both old and recent footage of all three guitarists and their respective bands. The stories of their rises to fame are both illuminating and hilarious. These two elements collide notably with cringe-inducing footage of a young U2 attempting punk rock as Bono flamboyantly jumps around on stage.

The documentary's problem, though, is its inability to capture the musical excitement in the rooman inexcusable shortcoming considering we have these three icons gathered together for the first time. The longer the film goes on, though, the more we realize that despite playing the same instrument, these guys don't have as much in common as we may think. Including The Edge is at the heart of this problem.

This is not to take anything away from The Edge as a musician, the instrumental backbone of one of the world's most popular bands. However, when you put him, a refined guitar player, up against these two blues-trained heavyweights, it's the Washington Generals vs. the Harlem Globetrotters come jam session time.

Two scenes capture this stylistic disconnect. In the first, Jack White passionately talks about acquiring guitars with broken or bent necks and "battling" them to make them perform his will. He talks about technology and its negative influence on music because it has created cheats and shortcuts for the lazy. The second scene features The Edge gleefully showing off his numerous effects pedals. The scene ends with him turning a bland two or three-note riff into a majestic tapestry of sound with one step on a pedal. You get the sense that Jack White walked out of the theater when he saw that.

The guitarists sitting down to jam over the Zeppelin classic "In My Time of Dying" makes this divide impossible to ignore. While Page and White rip into solos, willing their instruments into submissiveness, The Edge stands over them awkwardly, like a beginning student who accidentally signed up for the advanced class.

"It Might Get Loud" has a salivating premise and plenty of promise. However, the incongruence of its stars' styles and the resulting awkwardness prove to be obstacles too great to overcome. It leaves you thinking that the inclusion of an Eric Clapton or Joe Perry could have lifted this to the classic film it should have been.