Mississippi No. 1 in Obesity, Again 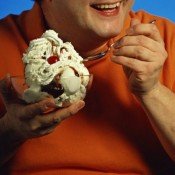 Mississippi is one of nine states with an obesity rate of 30 percent or more.

At 44.4 percent of children and 32.5 percent of adults, Mississippi leads the nation in obesity. According to the 2009 edition of "F as in Fat: How Obesity Policies are Failing in America," "The obesity epidemic is harming the health of millions of Americans, contributing significantly to skyrocketing health care costs and threatening the country's productivity."

This is the sixth year that the Robert Wood Johnson Foundation has published the report, and the fifth year that Mississippi has come in at the top. Three other states have obesity rates over 30 percent: Alabama, West Virginia and Tennessee. Eight of the 10 fattest states are in the South.

By comparison, in 1991, no state had an obesity rate greater than 20 percent.

The saddest part of that report deserves a special highlight: Mississippi also had the highest rate of obese and overweight children (ages 10 to 17) at 44.4 percent. So close to half of Mississippi's children are obese. That's heartbreaking.

On a brighter note, maybe we can get an endorsement deal from Crisco or someone like that to shore up the budget? The tag line could be "Crisco, the #1 lard in the #1 state for lard asses, Mississippi."

[quote]So close to half of Mississippi's children are obese. That's heartbreaking. [/quote]Yep. And probably half these kids will be diagnosed with diabetes before they graduate high school. The southern fried/sugar-filled diet is hard on a body, especially when the only exercise it gets is fingers typing at a computer or a phone.

They use BMI calculators in these studies that were developed in the 1850's that are totally outdated now. People are taller and larger in general now than they were 150 years ago. Their study results are flawed. Not that obeseity isn't a problem, it's just the these studies put average size people in the obestiy range when the shouldn't be.

The formula for calculating one's BMI is weight times 703 divided by height in inches squared. People being taller now means you are dividing by a larger number which then results in a lower BMI number. Theoretically then, there should be fewer obese people if height was the determining factor. Here in Mississippi, the determining factor is banana pudding, fried food, soda etc. The only thing flawed in this study is diet.

The BMI calculations don't take into account someone that has a high muscle mass it just put them in the overweight or obese catagory. If you use that formula most of athletes in the world are obese, when they aren't. You would think that being taller would result in less obese people using the BMI formula but it doesn't. http://en.wikipedia.org/wiki/Body_mass_index For a given height, BMI is proportional to weight. However, for a given weight, BMI is inversely proportional to the square of the height. So, if all body dimensions double, and weight scales naturally with the cube of the height (as is the case with a spherical cow), then BMI doubles instead of remaining the same. This results in taller people having a reported BMI that is uncharacteristically high compared to their actual body fat levels.

Not only that, but the BMI asserts a definition of "normal" that is not actually based on statistical norms. "Most people have an above-normal BMI" is a nonsense phrase; if most people have an "above-normal" BMI, then the BMI scale assumes an abnormally low weight. We determine norms based on what people actually do. The correct terminology would be "healthy" BMI, and that should be based on scientific research, not whatever the median weight was in 1850. To relate this to personal experience, I lost about 30 pounds in the past six months--dropping from +/-210 to +/-180. According to my doctor, normal BMI for my height (5'9") would be in the 160s or less. I remember when I weighed 160 pounds; I was bony as hell, my head looked huge, and there were no health advantages. I have no particular desire to go back. In fact, I'd like to start doing some resistance training and put on about another 10 pounds of muscle mass. Would the additional muscle mass mean that I might get reclassified as obese? I don't even care enough to check the BMI scale and see. We do have a problem with unhealthy obesity in this country... But we have an even bigger problem, IMHO, with unrealistic body image, particularly vis-a-vis women and girls. The medical community needs to base its ideal-weight framework around a well-documented, scientific idea of healthy weight. Pop aesthetics, particularly 19th-century pop aesthetics, should play no role in this.

Tom- like you I consider 180-190 the weight I want to be at being 5'8" and anything less and I looked boney. According the BMI scale we would be on the upper overweight scale almost obese.

Yep. And probably half these kids will be diagnosed with diabetes before they graduate high school. Jeff, please be careful with this. Our daughter, who is 10 and is in no way overweight, has type 1 diabetes. I understand that you are speaking about type 2, and the risk factors go up exponentially if the child is overweight. But children like our daughter have a disease where the pancreas no longer produces insulin. With type 2, the pancreas either produces less insulin or the body doesn't use it as effectively as it should. The problem comes in when she has to defend herself against the type 2 problems: for example, people telling her what she can and can't eat, telling her that she could take a pill and her diabetes will go away, etc. It is possible for people with type 2 to reduce or eliminate their medication needs just by getting in better shape. She will be insulin-dependent for the rest of her life, and her weight has nothing to do with it. Thanks. :)

I also take issue with the BMI. When I was 19, my weight got down to about 130 pounds when I was usually 10-15 pounds heavier. Since I'm only 5'3", one would think that's a decent weight. However, a few months ago, I found a picture of myself at that weight, and I thought, "Ick." I looked like a piece of spaghetti with a meatball on top, and my smile actually gave me creases in my face and neck. The person I was photographed with was about two inches shorter, and she may have weighed less than I did, and she looked great. I think it's because she had a naturally thin frame, but my frame makes me naturally pear-shaped, so that's why she looked good while I looked sick. I think body type should be taken into consideration. I don't know how many of you have heard of the terms ectomorph (naturally skinny), mesomorph (naturally athletic) and endomorph (naturally round), but I thnk the BMI should at least be redone based on these body types. It still wouldn't be perfect since many people are a combination of two body types, but at least it would be a start. Of course, this doesn't necessarily mean that such a change would lower our obesity rate very much, but at least the BMI would be a little more accurate. I think I mainly have a mesomorphic body type because I am pear-shaped. I was an ectomorph as a child, but that wasn't great either because I had trouble finding belts that fit me properly. Right now, I could lose some weight, but I don't want to lose my curves. I would rather hover around 150-160 pounds.