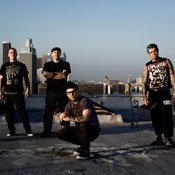 New-age punk rock, for better or for worse, can be tied to 1994. It was during this year that the genre re-emerged from music's doldrums and experienced a renaissance. Green Day and The Offspring spearheaded this re-emergence in the mainstream with their respective multi-platinum albums "Dookie" and "Smash."

Unfortunately, many punk traditionalists condemn the 1994 punk revival for removing the heart and passion from the genre that was known primarily for those qualities. It became about self-awareness, whininess and, worst of all, apathy. The Clash would never waste a lyric asking the audience if they had time to listen to them whine, as Green Day famously did. They were going to tell you either way.

The third band to emerge from the punk rebirth of '94 was Rancid with its platinum-selling album Ӆ And Out Come the Wolves." While major labels seduced Green Day and The Offspring away from their independent record companies, Rancid resisted the overtures and remained loyal to its punk-centric label.

Rancid comes at you with a similar approach as The Clash, and in a perfect world, they would carry the lasting legacy of 1994. The band members never shy away from edgy, relevant topics and never bite their tongues. The band is an unfailing supporter of the working class and social justice but are also not afraid of a good time.

"Let the Dominoes Fall," their first album in six years, demonstrates all these characteristics. They rant about the decline of industrial America ("This Place") and the Wall Street bailout ("Locomotive"), while still saving time for some chest thumping ("Last One to Die") and self-reflection ("The Highway"). The songs are catchy, urgent and musically complex.

One of the things that have long separated Rancid from other punk bands is their willingness to experiment, both within and outside their genre. They often have bass-driven, as opposed to guitar-driven, songsa rarity in punk. They also employ a twin vocal attack, with Tim Armstrong's slurry smokiness perfectly complimenting Lars Frederickson's angry righteousness. Similarly, they introduce elements of ska and dub on nearly all their albums, including "Let the Dominoes Fall." As a result, the band avoids the monotony that plagues most punk LPs.

The biggest weakness on "Let the Dominoes Fall," however, is its timing. George Bush's presidency supplied a near bottomless well of material for Rancid and other likeminded bands. Now his presidency has ended, and our new president is trying to undo many of his predecessor's policies. Rancid, however, is still singing about police states, government censorship and other anti-Bush buzzwords. It leaves the listener with a feeling of discomfort and bitterness where there needn't be any, like if your new bride asked about your ex-wife on your honeymoon.

Rancid has been the best and most consistent punk band for the past 15 years. "Let the Dominoes Fall" proves to be a worthy addition to their ambitious catalog, emphasizing their strengths while also breaking new ground stylistically. My only regret is that while this Bush-bashing album is good in 2009, it could have been great in 2006.