Anger: Confusing the Story With Reality 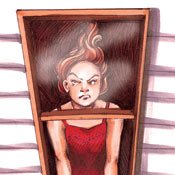 A few years ago, I nearly got into a war with one of my housemates.

My housemate, whom I'll call Evan, frequently spent nights away from the house. And, even though he would be gone for days, he would leave his bedroom window wide open. It was on the ground floor and didn't have a screen on it.

I would come home to our big, empty house late at night and find his bedroom window open. I anxiously flipped on all the lights and looked under the beds to make sure no intruders had slipped into the house. The mosquitoes that flew in during the balmy summer nights would frequently bite me.

I began walking into Evan's room and closing his window, feeling a bit guilty for intruding on his space but justified in protecting my well-being.

One day, I ran into Evan in the kitchen, and he asked, "Have you been closing my window?"

Apologetically, I said yes and explained why. "Can we figure out a solution that works for both of us?" I asked.

My jaw dropped, and I didn't know how to respond. Finally, I said through clenched teeth, "Well, thank God we're moving out in three weeks."

Evan proceeded to go out of town for five days and leave his window open again. Ignoring his demand not to, I went into his room and closed the window.

A few days later, I came home to find a sign in huge red scrawl taped to Evan's door. It said: "Stay out of my f*[email protected]#% room!"

I wanted to take revenge on Evan so badly. I wanted to boil my Chinese medicinal herbs outside his open window so the stench filled his room. But I was honestly afraid that he'd slash my car's tires if I did. I prayed that no thieves or murderers would be in the neighborhood for the next couple of weeks, and I left Evan's window alone.

Why we get angry, and how it hurts us
We tend to get angry when we feel that we're victims of injustice, or when we perceive an obstacle to our goals. We also may get angry when someone criticizes or insults us, especially when they're upset themselves, or even threatening.

Feeling anger in these situations is natural. It's our body's way of protecting us from threats. Anger triggers the brain's "fight or flight" response, readying us to confront a threat or run the other way.

When we frequently let ourselves get angry or act on it thoughtlessly, anger can damage our health and relationships. Chronic anger can:
o Raise blood pressure and cholesterol levels
o Increase the risk of heart disease and heart attack
o Disrupt metabolism and encourage belly fat deposits
o Lower the immune system
o Interfere with personal and professional relationships
o Contribute to destruction of property and physical violence

Separating fact from story
It's never the events themselves that make us angry. Rather, it's the one-sided story we tell ourselves about what these events mean. It's natural to create these stories, because it's how we make sense of the world. However, it's important to remember that these are just our one-sided interpretations. It's when we confuse our stories with reality that we become unhappy.

For example, when Evan wouldn't consider closing his window and left the note on his door, I decided that he was a sociopath. I labeled him sexist, unreasonable and probably violent.

In reality, all of this was a story that I made up about Evan, not "the truth." The facts were that he had told me not to close his window and had left a note on his door telling me to stay out of his room. I had inferred that the note was meant to threaten me, and that he was a selfish jerk, but those were my own biased conclusions. I got upset because I couldn't, or wouldn't, separate the actual facts from my interpretation of those facts. I got angry because I was "right," and he had wronged me.

Compassion
Spiritual leaders from many traditions teach compassion as the key to diffusing anger. Having compassion means assuming that people do the best they can with what they have at the moment (Whether that is information, genetics, culture, etc.) It means that because you're not perfect, you can't expect others to be, either.

Treating Evan with compassion is difficult for me even today, but I try to imagine why he acted the way he did. Maybe he had been mistreated as a child and was therefore conditioned to mistreat others. Perhaps he was going through a difficult time and was taking out his frustration on me. If I really think about it, I feel sad that Evan felt compelled to behave the way he did. If he continued to treat people that way, he would have had a lonely life.

I'm glad that I resisted my urge to retaliate against Evan, as unjust as I thought his actions were. Starting a housemate war would have made the situation worse for us both. So I let go. There was nothing else I could do to improve the situation.

Feeling chronically angry without channeling your feelings into constructive action will end up hurting you and the people around you. Pay attention to that familiar "fight or flight" response as your anger rises. As your breath and heartbeat quicken, choose your next actions carefully. If you act with compassion, or just let go and walk away, you'll thank yourself later.

Anger Do's and Don'ts
It's natural to feel angry now and then, but what matters is what you do with that anger.

1) DON'T begin a discussion in anger. Interactions that start harshly nearly always end harshly. DO practice broaching a subject in a calm, non-accusatory way.
2) DON'T lash out and say hurtful things that you can't take back. DO seek first to understand, then to be understood.
3) DON'T let an argument escalate into a yelling match. DO leave the space to cool down if you need to, communicating a time you'll resume the conversation.
4) DON'T insist on being right at the risk of damaging your relationships. DO consider that you may not have all the information or the answers.
5) DON'T blame others for making you angry. DO accept responsibility for all your feelings and actions.

Healthy Ways to Release Your Anger
• Wail on something inanimate. Use your fists or a paper bat (try duct-taping a rolled newspaper) and smack a pillow until you calm down.

• Take up an aggressive sport. Get out your negative energy through martial arts, kickboxing, wrestling, football or rugby.

• Scream at the top of your lungs. In your car or empty house, yell at the person you're angry with, as long as they're out of earshot. Know that you'll have the pleasure of the final word.

• Write a ranting letter to whomever you're angry with (even yourself, or God/the universe), knowing that you can express yourself freely because you'll never send it. Curse. Use capitals. Then carefully burn the page in the fireplace or on the stove.