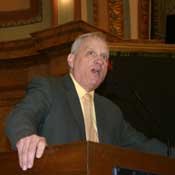 We had a very good bill pass the House this past week. The bill sets up a procedure to allow for the adoption of "unwanted" embryos.

On line 215, though, are the words "Adoption by couples of the same gender is prohibited".

I find it repugnant that when we get a chance to make a point on this topic we take the opportunity to demean, either intended or unintended, another person who's not like us, we go ahead and do it.

I do not know why we take every opportunity to say, "You're not wanted," especially when we allow children to live with dope head, miscreant single, straight parent mothers at least until the live-in boyfriend shakes the baby to death because it disturbed him at the wrong time.

But the bill does more than demean gays, lesbians, bi- and trans-sexuals. It uses medically discredited, ideological language to magically transform a frozen human embryo into a child.

Religious fundamentalists and right-wing conservatives hold that human life begins at conception, using that argument as a platform against both abortion and most forms of contraception. HB561 would legislate this ideology.

The medical community, including the American Medical Association and the American College of Obstetricians and Gynecologists, define pregnancy as beginning at implantation, eight to 18 days after fertilization. One-third to one-half of all fertilized eggs never fully implant naturally, they say, and up to 20 percent of all implantations end in miscarriage, most before the women knows she is pregnant.

Given the medical definition of pregnancy, a frozen human embryo is no more a child than an acorn is an oak tree. Allowing for embryo adoption, however, takes one more step forward to granting legal status to the "pre-born," in direct opposition to scientifically based, medically accurate information.

The push for frozen embryo adoption is directly traceable to the stem-cell controversy, according to an MSNBC commentary from 2003. In fact, HB 561 uses the same number of frozen embryos nationally (400,000) cited in that commentary.

The Problem with Embryo Adoption by Arthur Caplan, PhD, director of the Center for Bioethics at the University of Pennsylvania in Philadelphia, Penn., describes the process by which embryos are created:

The woman takes fertility drugs that cause her to produce far more eggs than the one she normally would release during her monthly cycle. These eggs are then surgically removed from her ovaries and fertilized in a dish with either her husband's or a donor's sperm.

Often many embryos are created through this process. But since multiple-pregnancies  quadruplets, quintuplets, septuplets and the like  produce premature and often unhealthy babies, doctors will only put two or three embryos back into the woman's body to try and help her become pregnant.

The clinic chooses to implant the embryos that look the healthiest and asks the couple if they want to freeze the rest. The couple also has the option of having the remaining embryos destroyed, donated to other couples, or donated for embryonic stem-cell research.

Caplan then pinpoints Christian adoption agency Snowflakes, which matches frozen embryos to infertile couples who want to have a baby.

Nearly all infertility clinics offer couples the option of donating their leftover embryos to other couples. All that Snowflakes has done is brought the rhetoric of adoption into the process.

You might also get the impression that Snowflakes is creating an opportunity for infertile couples to access the 100,000 to 400,000 frozen embryos out there. But that is not really the case either. If you are infertile and are trying to have a baby, your best bet is not to use a frozen embryo made by a couple who had themselves been going through infertility treatment and whose embryos were not used because they did not look healthy enough.

Caplan goes on to say that "most frozen embryos are not healthy enough to ever become babies," with the odds about "one in ten" for embryos frozen for five years or less to grow to full term; the longer the embryo remains frozen, the lower the odds. In addition, if the embryo is from a woman aged 45 or older, the chances are almost zero. And, "infertile couples who want children can frequently make embryos but they cannot make embryos that become fetuses or babies."

Adding those statistics to the overall success rate of In Vitro Fertilization (from 6 percent to 35 percent, depending on a woman's age, according to the American Pregnancy Association) underscores the faulty logic of equating a frozen embryo with an actual child and giving that embryo legal rights.

So, out of curiosity, can I claim them as dependents? Apply for federal aid? You get the picture...

Here's a link to the bill. Good questions, kaust. Pro-lifers believe that by giving embryos legal status, they will eventually be able to prosecute women who take birth control that prevents implanting an embryo into the womb (like birth control pills and IUDs), and those who abort--even for medical reasons. It's not a huge leap from there to prosecuting women who miscarry and on and on. It's clearly a back-door anti-abortion strategy. One would think our legislators would have better things to do, like providing decent education to Mississippi's young people.

This should be called the Nadya Suleman (you know, Octo-mom) law since, based on interviews, that was her justification for implanting all 6 leftover embryos. She claims if they weren't implanted, she would have been killing her babies.

One would think our legislators would have better things to do, like providing decent education to Mississippi's young people. Ronni, That is what prison is for according to the ACLU report about alternative schools. It's amazing we only care about kids until they are actually born.

They are so much easier to take care of before they are born!

If I'm thinking correctly (which is more difficult now that I'm knocked up), this exact same bill was recently voted down in Colorado. The implications of it are scary. Being pregnant myself, they are even more accutely scary. I'm currently six and a half months pregnant with what turns out is a perfectly healthy little girl. Although, four weeks ago the doctor (because of a stupid blood test) told me she might have a life-altering chronic condition. After a week of invasive testing, turns out I was in the five percent of people that test a "false positive" on that stupid blood test. But, The Man and I were forced to have real conversations about having a special needs child. What if we didn't want to have a special needs child? It wouldn't have mattered. The State of Mississippi would have forced us to have a special needs child. The second objection I have has to do with pregnancy-induced illnesses. If I come down with Pre-eclampsia or some other illness that is life-threatening to me and can only be "cured" by delivery (even if this baby isn't viable at that time) does this law protect ME from death...or protect an infant staying in my womb that will surely kill me and therefore, kill IT? This bill squashes ALL RIGHTS of a pregnant woman. Now that I AM pregnant and understand this stuff, I think people thought it would make me turn "pro-life" (at least those are the comments I got...) turns out, I went the OTHER DIRECTION. I am even MORE sensitive to the needs of women-most especially pregnant women. A man wrote this bill, didn't he? Just a few thoughts...chew on them.