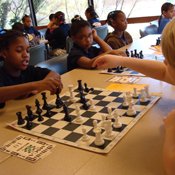 Olivia Hardges, 9, a third-grade student at Marshall Elementary arrived at the JSU e-Center before 8 a.m. on Jan. 23. As other kids gathered in the California room, also wearing their uniform polo shirts and khakis, Olivia passed the time before the chess tournament playing Mancalaa strategy game involving small stonesrather than practicing the game she came to win.

While their children practiced against teammates on plastic checkered mats, parents sat along the perimeter of the room, occupying themselves with books or babies on their laps.

Close to 8:30 a.m., Julie Hart, who coordinated this year's tournament, entered the room with the fanfare of a circus ringmaster. "Gooooood Mooorning, boys and girls! Are you ready to play chess?"

As Hart explained the schedule for the day, Olivia tilted her head, which was covered with little braids, to listen closely.

Last year, Olivia placed third and received a small trophy in the shape of a king at the annual Jackson Public Schools chess tournament.

This year, she wanted to take home another trophy. "I feel nervous," she said before the tournament began.

'It's OK To Smile'
Like many of the 140 students competing in the tournament, Olivia learned to play chess as an elective activity in the Open Doors program. Two of her older sisters learned to play there as well, and the girls practice together nearly every day at home.

Hart described Olivia as a student who is gifted because "she thinks outside the box and sees things more broadly" than many of her peers.

Open Doors students, who take a test to qualify for enrollment in the program, leave their regular classes for five hours per week to do activities targeted at gifted students. Open Doors teachers say that chess fosters skills like self-discipline and perseverance.

When cued, Olivia followed the other third graders to crowd around the list that assigned her opponent and chessboard for Round 1. She dodged through the masses down a long zigzag hallway, the laces of her black sneakers dangling, and entered an enormous conference room. She found her seat assignment and sat down at one of five long tables, opposite a girl named Keanna.

Hart came to the front of the room and welcomed the players with an enthusiastic round of applause.

She introduced Albert Hinson, one of the tournament directors and co-president of the Mississippi Scholastic Chess Association, who carefully explained the rules: Each game would last up to 30 minutes, and students would raise their hands once one had declared "checkmate."

Parents and coaches had to leave the room as soon as the round began.

"Good luck; have fun." Hinson told the students. "And it's OK to smile."

Checkmates and Lunchables
Olivia reached across the table to shake hands with Keanna. The room became quiet, except for the sounds of chess pieces clunking against the wooden tables and soft voices saying, "Check." A look of concentration came over Olivia's face. She lowered her head to level her eyes with the chessboard. After a few minutes, Keanna's hand shot up. One of the tournament officials in red shirts came by and confirmed the checkmate. The girls filled out their score sheet and handed it to one of the teachers at the front of the room. Olivia, seemingly unfazed by the loss, skipped to the snack table for a danish and juice, and headed back to the California room.

"How did you do?" asked Irm Heinsch, the Marshall Elementary school counselor. Olivia shrugged and shook her head sheepishly.

"It's OK," said Heinsch. "There's always another round."

In Round 2, Olivia played against Dakota, a round-faced boy and one of the only white students competing. He checkmated her almost immediately. Olivia had beaten Dakota in last year's tournament with the same four-move checkmate.

"He learned from me," she said. "I was surprised."

Between rounds, Olivia and her peers munched through their lunches. By Round 3, Capri Sun and Lunchables wrappers littered the California room.

Olivia got testy with her Round 3 opponent, because she didn't understand the rules of chess and kept trying to make illegal moves.

By the end of the round, Olivia was moving pieces on her opponent's behalf just to move the game along. She ended up calling the round a draw because she was
so bored.

In Round 4, Olivia used her famous four-move checkmate to beat her pigtailed opponent, Selah.

"That ain't no checkmate," Selah said at first. Then, once the tournament director had confirmed it, she wondered aloud, "How did she get checkmate so quickly?"

Olivia grinned. Her stats before the final round: Two losses, one draw and one win.

The day went by quickly, and before the final round, the California room buzzed with noise and activity. One of the coaches led her students in synchronized stretches. Cameras flashed as parents took pictures. Olivia darted around the room, playing with the Venetian blinds and laughing with her friends.

Hart came in and summoned everyone into the conference room. Parents crowded at tables and stood around the back of the room. Olivia said that her uncle was on his way to pick her up, but he hadn't arrived by the time the awards started.

'You Win Some, You Lose Some'
Hart called the second-grade winners, and Olivia cheered for Robert, a boy from her team who placed
seventh.

As the second graders took their seats and Hart raised her list to announce the third-grade winners, Olivia's demeanor changed. She sat up straight, square shoulders tense and began chewing on her thumb. She crossed both sets of fingers and her wrists. She held her breath and fixed her eyes on Hart.

"I hope I win something," she whispered, fidgeting in her seat.

As Hart continued announcing the winners, Olivia knew that her chances of placing in the tournament were decreasing. When the final trophy winners walked the front of the room, where they smiled for flashing cameras, Olivia folded her arms on the table and buried her face in them. A couple of teachers rubbed her back to comfort her as they walked past.

Around 3 p.m., after Hart had announced all the winners, Olivia raised her head, took a deep breath and wiped her eyes. When asked if she had fun at the tournament even though she didn't get a trophy this year, she nodded. She said that she planned to compete again next year and would practice in the meantime.

"Some of them cry because they're disappointed, and they think they'd disappointed you, too," Hart said, adding that chess teaches her students to lose graciously and take setbacks in stride.

"I tell them, you're here to have fun and do your best."

She smiled with the wisdom of a veteran teacher. "You win some, you lose some.