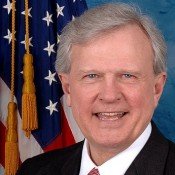 In a move that some Democrats find unsurprising, first-term Alabama Congressman Parker Griffith announced yesterday that he was switching his party affiliation from the Democrats to the GOP. In a prepared statement, Griffith said there was no place in the Democratic Party for a "pro-business, pro-life, pro-Second Amendment" legislator.

"He went off the reservation a long time ago," a Democratic aide told MSNBC's First Read, adding, "This just confirms what we already knew for a long time. This is not based on his voting record. It's the way in which he's conducted himself."

Griffith has been in staunch opposition to House Speaker Nancy Pelosi and was one of four House Democrats to oppose the stimulus, cap and trade, and health-care reformthe others are Walt Minnick, Idaho; Bobby Bright, Ala; and Mississippi's own Gene Taylor. He also voted against Wall Street reform and the Lilly Ledbetter act, which amended the Civil Rights Act of 1964 to remove the 180-day time limit for equal-pay discrimination lawsuits.

Regardless, his voting recordnearly 85 percent with the Democratic Partymay well be an issue for conservative Republicans in future elections. Elected just over a year ago, Griffith said yesterday that he would return campaign contributions if asked. The Congressman has more than $600,000 remaining in his campaign war chest, reports The Huntsville Times.

Hm... sincere or another RINO? Time will tell.

All he is worried about is his own re-election. He sounds like an opportunist who thinks having an 'R' next to his name will help in the next election cycle.

What a Christmas present. See ya later, partner, Congressman Griffith. Don't let the doorknob hit ya ..... Take Gene "the Snake" Taylor with you. Don't forget to take Joe Leave-a-man too. Boy, doesn't he need a good ole breakdown? He robbed Peter to pay Paul then robbed both of them. If that ain't a republican, I don't know what is? Why the Democrats still accept him is beyond me.

I don't get why anybody, of either party, would actually vote against the Ledbetter Act. That's just plain weird.