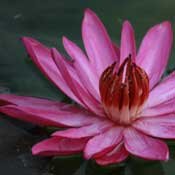 A smell so offensive and overpowering that I could only refer to it after as the "R incident," is what forced me to "Come To Jesus," or rather, to seek my inner Buddha.

For the sake of clarity, I'll elaborate: "R" refers to Rat. The one that had melted into the back of my stove, and that no one, not even an exterminator, could locate for days in the apex of last winter. My kitchen became a no-go zone. In fact, the whole place was hazardous; I hated coming home after work, which was troubling. Other than a few good friends, my lovely apartment was the one place I considered my refuge and solace, and it had become tainted.

By the third day I sprinkled baking soda all over my kitchen surfaces and floor, and the place looked like the scene of a (rancid) powdered-donut factory implosion. I burned incense and scented candles, anything to get rid of the odor. I had already checked the back of the stove, but not thoroughly. The morning before my neighbor helped me find it, I nearly gave up. I dropped into a chair in the frigid and unbearable kitchen, and started to chant, desperately, sending clouds of my breath into the room. I suddenly saw the stinky situation was an obvious reflection of my life.

A year had passed since my ex and I finally ended our turbulent seven-year relationship, but I was still dealing with that loss. I had been battling a cigarette addiction for six years, was drinking too much and staying up too late. I was wasting my brain with a full-time data-entry job. Though there were great fringe benefits, like a steady income and tight camaraderie with my coworkers, other things about the job were miserable, including daily eye strain, headaches and mental exhaustion. Having already lived through a traumatic childhood and a debilitating chronic illness as a young adult, the way I treated myself as an adult wasn't much better.

It took the rat to finally jostle me to the point of taking action.

At the time of the "R incident," I'd been dabbling with Nichiren Daishonin Buddhism for a couple of months. My parents had introduced me to it when I was about 8 years old, right around the time celebs like Tina Turner were making it fashionable. But my parents were also former transcendental meditators and noncommittal to either practice. As a result, my exposure was limited. But one thing sank in: Nam-myoho-renge-kyo. Whenever something seemed potentially perilous, or I really want something, I would chant that almost by reflex.

The night we found the R was an intense relief. My neighbor kept offering to call one of our tough guy friends to do the dirty work, but I refused it. I had to get rid of the R myself, I determined, if I were going to change my life.

And this is at the heart of Nichiren Buddhism: "human revolution." Based on the Lotus Sutra, it is about developing yourself against all odds, in order to eventually help others, like the Lotus flower that blossoms out of mud.

A month later, I handed in my two-week notice at work, started writing again, found other Buddhist Soka Gakkai International members in Mississippi, and hooked up with a local agency to teach English as a second language (which I did for four months) as a volunteer. Within weeks, I also quit smoking, cut way back on drinking, spent more time outside and started meeting with a friend for a writer's group, affectionately termed the Slacker's Club.

Hope began to replace fear, but there was still more work to be done. In an effort to de-compartmentalize my life, I made a point to delve into more of my own hang-ups and insecurities. I wanted to improve existing relationships with friends and family, which caused many more metaphorical rats to crop up, ironically. But also many benefits.

On any given day, I might face my inner hell and my inner Buddha nature. I still get tripped up by my ego and make mistakes. All those bad habits I kicked, I've repeated them once or twice. Growth takes conscious effort, and it can hurt. That said, it feels worse to be complacent. I try to stay aligned with the strength and compassion I feel when I am empowered, and pass that along to others when I can.