[Rob In Stereo] A Question of Raditude 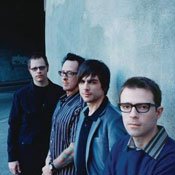 Weezer has made relevant music for the past 15 years.

I have never been so thoroughly confused by a generic mainstream rock album as I am by Weezer's "Raditude." My initial instinct was to hate it, to pronounce that Weezer has at last become part of the pop-music machine that its members have spent their careers mocking. But when you think about the band and its past hijinks, one can never be sure.

Weezer's longevity is astonishing. The band has been releasing music for 15 years and not once during that point did it fade into irrelevance. Every album sold well, and two of those albums, "The Blue Album" and "Pinkerton," are now recognized as classics.

No band in that time period displayed a drier sense of humor, both in print and on record. Interviews were often permeated with an almost inhuman level of smugness and arrogance, almost as if attempting to alienate as many fans as possible. That humor has thankfully been easier to detect in the music than interviews. It also produced some of the most warped love songs and bizarre song topics tackled in radio rock over the decade.

"Pork & Beans," the lead single off last year's "Red Album," was the most recent display of the band's sarcasm combined with its middle-finger attitude. It was Weezer's finest single in years and most relevant and brazenly cocky song since 2002's "Dope Nose." "Pork & Beans" reassured the listener that Weezer wasn't going anywhere and sure as hell wasn't going to sell out to some record company-executives' desires.

Which is what makes "Raditude" so strange. It is the most blatant sell-out album of the year, which returns us to the question: Is this a brilliantly elaborate joke by Weezer on the listener?

Or did the pushy record executives, promising less work and greater sales, legitimately persuade the band to let Jermaine Dupri and Lil Wayne into the studio to sing about Patron tequila and "the Goose" on "Can't Stop Partying?"

The lyrics on the album certainly suggest the latter. They are the corniest and most mawkish lyrics to grace a rock record since the Presidents of the United States' last album. The eye-roll meter is off the charts. It's like watching a sixth-grade boy trying to ask a girl out, which may as well be what some of these songs are about.

Yet there is something magnetic about the record. The band's longstanding ability to extract the beauty out of the simplicity of pop music is on full display here. "Let it All Hang Out" and "(If You're Wondering if I Want You to) I Want You To" are both legitimately fantastic songs, if a bit hammy.

It is frustrating trying to figure out Weezer's motives on "Raditude." Then again, this is Weezer, a band that not only has displayed no qualms in frustrating fans, but actually seem to revel in it.

My best advice is to allow "Raditude" to suck you in, and you can judge their intentions.