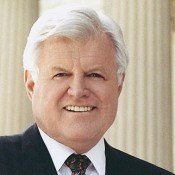 Massachusetts Sen. Edward Kennedy, 77, died early today of a brain tumor. Kennedy served in the U.S. Senate since 1962, when he took the seat held by his brother, John F. Kennedy, when John Kennedy became president, and held the seat for nearly 50 years.

The senator is the last of three brothers who led a political family dynasty, which included his brother Robert "Bobby" Kennedy. Over the years, Sen. Kennedy has been a leader of liberal Democrats and a commanding presence on social justice issues and health care.

I heard on GMA that Kennedy had the worst kind of brain tumor, so the fact that he lived 15 months after his diagnosis was a surprise.

This is a very sad day for America's political structure. The death of Kennedy signals a void that will not be filled anytime soon. His understanding of the world's problems, especially as it relates to poverty is simply phenomenal! His whole career in the Senate was spent looking out for the well being of others. Added to his political mission are the heartaches and disappointments with so many family deaths and health issues. President Obama will miss his drum-major for health insurance. We must make our voices stronger and more frequent on this issue.

I bet the family of Mary Jo Kopechne is not in mourning today for the man who killed their daughter.

I bet they are. Remember Mary Jo Kopechne was not a minor. She was an adult in a relationship with a married man. What evidence do you have, BubbaT of an intentional murder? He did everything he could to protect this relationship. One thing that we can all agree on is that Mary Jo could not swim.

Jess: It wouldn't be intentional, it'd be negligent homicide. Kennedy just couldn't admit he was too scared to try. He's dead, and that's that. No more "Camelot" and no more "American Royalty". Maybe we can move on from the 60's finally.

Justless- you don't read to well do you? Did I say he intentionally murdered her? I said he killed her that's 2 different things. Yeah he did everthing he could to hide the fact that he was driving drunk, ran off a bridge and she drowned. There's tons of evidence of that, that little search button on your computer will help you out there.

No BubbaT, I don't "read to well". ...and your point is? Before you criticize me for not being able to read, look at the grammar you used, i.e.,"to well." Can anyone spell "too"? These are the kind of comments that are alive and well with certain people in our community. I only pray that my grand children will not have to interface with you or anyone with this type of mentality who has at its core, racist thoughts and motives. Can this be a discussion without personal attacks? Must you always assume that all people who do not agree with your assessment on certain issues are dumb asses?

Justless- you don't read to well do you? And Bubba, her user name is "Justjess," "justless." She's right: lose the personal attacks. They're beneath you, and the rest of us. If you have a valid point, you can make it without going ad hominem.

Throughout his career, Kennedy championed causes that would benefit everyone, regardless of their status in life or skin color. While you hasten to criticize and attack him, step back and examine your own motives... perhaps you have feelings of inferiority that motivate you to degrade and cheapen this man's legacy. JFK said it best: we often enjoy the comfort of our opinion without the discomfort of thought.

One other point, Ironghost and BubbaT, just remember that when John F. Kenndy was assignated, there were people who were clapping their hands, saying things like, "It's about time" and even young kids in kindergarten classes here in MS were screeming, "Thank the lord, he's gone." These kindergarteners are now adults and many continue to harbor their hatred of the Kennedys or anyone perceived as helpers of black folks. This is the way of THE OLD SOUT and change "ain't 'bout to come too soon."

Jess- Sorry, really shouldn't have snapped at you, the steroids I take make me go from snappy to happy in a few seconds and don't realize it. Still no excuse for being rude to a lady, sorry. I did try, to go back and spell your name right and fix my grammar, but waited too long. : ) Donna- Yes, ma'am

That's what I like about you, Bubba. You're man enough to apologize when you act up. Thanks for being classy about it. ;-) And don't call me ma'am!

BubbaT, you mean like my spelling of THE OLD SOUT? I'm missing the "H". We all make mistakes from time to time. I can "snap" in a New York second, also. We all have unresolved feelings from our past experiences; however, it is only when we can discuss ideas that we develop tolerence and perhaps create an atmosphere for some real change. This is how we can begin to shift our State from the bottom of the pile.

Donna- You're gonna have to accept the ma'am. My Mama taught me you always say ma'am to a woman over the age of 18 no matter who she is, and my Mama outranks you. :)

OK. I have a soft spot for mamas. And being that it applies to everyone over 18, then what can I say? ;-)

[quote]These kindergartners are now adults and many continue to harbor their hatred of the Kennedys or anyone perceived as helpers of black folks. This is the way of THE OLD SOUTH and change "ain't 'bout to come too soon." [/quote] Right, cause all kindergartners are like that. I know I'm still scared of the dark to this day. :) The old south is gone. It can't be used as a bludgeon anymore. Time to move on from that.

Please notice in my post that I didn't say that "all" continue to harbor their hatred of the Kennedys... I said that "many" continue to.... This is true because some of these now adults have had other experiences: They have been given the opportunity to witness the lives of others whose skin color might be different. They have lost loved ones and now know the pain associated with grief and loss, suffering and eventual death. These are the qualities that make us human: The behaviors that seperate us from lower animals, or at least it should.

Iron, I can only wish that the 'old south' was behind us. Have you looked at the Mississippi flag lately? (I suppose that there are not too many at half-staff today!) We still have a very long way to go before 'we get to the promised land!'

The reason for my vast antipathy towards the Kennedys is simple; they had become such Pop Culture Idols. Something people of a generation were supposed to worship. Reading around the web I see some journalists still do bow down towards the Kennedy Compound. They're supposed to be living symbols of Camelot, "American Royalty", blah blah blah... No one is worthy of that level of worship. Brain Cancer is a painful way to go, and I'm not sure if even Ted deserved that. But in the end, He's gone. It's as simple as that.

Only in Mississippi can you go from discussion about Teddy Kennedy dying to people shouting racist at each other. We are so screwed.

Southerners should get on their knees once a year and thank God that the Kennedys and President Johnson forced their ancestors screaming, hollering and crying from their savaged and barbaric Jim Crow ways into modern and humane times. They should also get on their knees and thank God that John Kennedy was supremely humane and political with the Mississippi governor, Lt. governor, the Sovereignty Commission, the Citizen Council, the KKK and many other nuts and racists who tried to stop the integration of Ole Miss and so many other things. Yet they are not thankful, appreciative or acknowledging of these facts. Unfortunately, Eastland, Barnett, Stennis, Johnson, Thompson, Simmons, Killens, Sillers, Coleman, Clark and others of like character are their heroes instead. As surreal as it might be, many descendants of the said ungrateful beings have the gall to accuse those of us who have moved on as not moving on. Of course, I know what they want and desire most is for us to go away so that they can practice their religion of hate and superiority unabated, unchallenged and with impunity. We can't and won't do it though! The Kennedys are heroes to most of us, I believe. Ted leaves a wonderful legacy. I'll put his legacy up against any southern senator or representative. Unlike most southern senators and representatives, he wasn't perfect. Can you say Vitter?

Mace: For the record, I hate that silly flag.

Amen to everything Walt said.