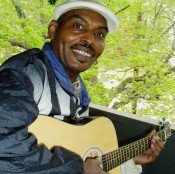 Schimmel's Restaurant is hosting a benefit for blues musician Ben Payton on Sunday.

Ben Wiley Payton, 62, grew up with the Mississippi blues. The Coila, Miss. native listened to his grandmother, Mabel Johnson, playing gospel music on piano, and his uncle, Joe Birch, picking the blues on guitar.

In the 1960s, the teenaged Payton moved to Chicago with his family, and he soon added his own guitar talent to the city's thriving music scene. He backed jazz pianist Randy Weston in the R&B Chicago Sounds group, traveling with Weston to Morocco where they performed for six months in 1970. Payton also worked regularly with Bobby Rush and Joe Evans and the Supersonics.

Payton returned to his roots in 2002, coming back to Mississippi and to the Delta blues sound he grew up with. In Jackson, he frequently performed solo acoustic guitar sets at Schimmel's Restaurant, but also played with his band of local musicians, the Ben Payton Band. Recently, he briefly returned to Chicago to play at the Chicago Blues Festival, June 12 and 13.

While his playing might seem casual and laid back, it's anything but.

"He knows exactly what he's doing," says fellow musician Chris Gill, who has often had the pleasure of accompanying Payton and hearing him play and sing in Jackson.

"He's such a beautiful person," Gill says, "a loving guy." Judging by the benefit turnout, it's an opinion shared by many who know Payton.

Schimmel's and the Central Mississippi Blues Society are joining forces for the benefit so that all of the night's proceeds can go directly to Payton for his medical expenses. Other sponsors include Scott Barretta of the "Highway 61 Blues" radio show heard on Mississippi Public Radio and Pat LeBlanc of the "Southern Crossroads" blues show on SuperTalk radio.