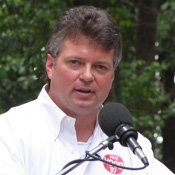 Citing case law that restricts the Mississippi governor from selectively vetoing the purpose of an appropriation and redistributing its funds, Attorney General Jim Hood filed a lawsuit against Gov. Haley Barbour for his partial veto of Senate Bill 2041 during the last legislative session.

Barbour issued a June 30 statement regarding his partial veto of the bill, which funds the Mississippi Department of Public Safety. He argued that a portion of the appropriation, which provides for salary "supplements" (essentially overtime pay) for hundreds of state troopers, "severely restrict(ed)" the department's management authority and could force cuts in other department areas, such as the medical examiner, the bureau of narcotics and driver services. He also said it was "vital" for DPS leadership to have the latitude to cut spending in areas where important services risked disruption.

Barbour's veto puts those funds back into the general fund to spend any way he sees fit, blurring the lines between legislative and executive powers, and violating the law, Hood indicated. He told reporters yesterday that state law is clear about a governor's authority to dictate the appropriation of state funds.

"The law is crystal clear that the governor cannot veto a condition of an appropriation bill," Hood said, adding that his office "had plenty of other cases we could be working on rather than ask the court to once again show the governor what the law is."

Hood is confident that the courts will side with his argument judging by the amount of case law available on the matter.

"This goes all the way back to 1898, when the Supreme Court said you can't take the money and say you're going to use it for a different purpose than what the legislature approved. You can't give someone the authority to just ignore what the legislature says on an appropriations bill," Hood said.

Barbour's redistribution of an appropriation without legislative approval represents a deviation from his stance in 2005 and 2007, when he decreed that the Partnership for a Healthy Mississippi should not be allowed to receive funding from the state's share of a nationwide tobacco settlement without the approval of the Legislature. Former Mississippi Attorney General Mike Moore had helped direct $20 million in funding in 2000 to the private nonprofit to conduct smoking cessation campaigns.

The state Supreme Court ruled in Barbour's favor, though the governor had already cut funding to the successful anti-smoking group, essentially killing it even before the court's ruling.

Hood indicated the suit was not a partisan issue, and said he would have happily filed the case had the governor been a Democrat, pointing out that former Attorney General Mike Moore, a Democrat, filed similar suits against former Gov. Ronnie Musgrove, also a Democrat.

The suit, filed in Hinds County Chancery Court Monday, seeks an injunction against the governor's veto to nullify it. Co-plaintiffs on the suit with the Attorney General are House Speaker Billy McCoy, D-Rienzi, and House Appropriations Committee Chairman Johnny Stringer, D-Montrose.

Barbour's spokesman Dan Turner did not immediately return calls. He is quoted in other media as saying "Any comment we have is going to be made in the court of law, where it belongs."

What the hell does section 73 allow then? [quote]SECTION 73. The governor may veto parts of any appropriation bill, and approve parts of the same, and the portions approved shall be law.[/quote]

We have updated this story for clarity and provided a link to the lawsuit. Iron, apparently, the law says the governor can veto part of an appropriation, but he cannot veto funds the Legislature approved for a specific purpose and then spend it any way he wants to.

You desperately needed to add that expansion and explanation. I'm going to assume that the rest of the suit is going to argue the ultimate destination of the money that's been vetoed. Which might be settled someday, given how the courts go.