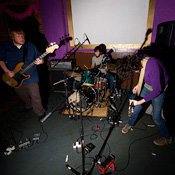 You can barely see Ben Shea's his face when he sings, because it's occluded by a never-ending fount of dark brown curls, and he tends to look away from the crowd. At one point, he rises to his tiptoes, then suddenly bends his torso completely over, giving full dramatic force to those seductive guitar bends.

Between songs, bassist Harry Crumpler engages the crowd with the affable demeanor of a southern gentleman. During songs, he bites down on his lip, closes his eyes halfway and gently rocks forward to show that he's feeling the music. Drummer Simon Davenport has a hint of crazed mischief in his eye, a subtle preview of the ferocity he unleashes on his drum kit with equal rigor. They may look like ordinary guys, but the Hattiesburg-based Dark Knights of Camelot know how to rock.

Each band member began playing music as a kid. Shea began playing guitar at 10 or 11, and Crumpler started playing saxophone in sixth grade; but Davenport wins the crown for earliest musical interest. "I started on pots and pans, got my first drum set when I was like 6 or 8," Davenport says. "I've always had a drum set since I can remember."

"I never played it right, " he sheepishly adds. "I used to stand up."

By the time they became young adults, what was once child's play had evolved into skilled musicianship and a dedication to making quality music. "We're out here in the streets, and not too many people are rocking." Crumpler says, reflecting on his time touring. "It's disappointing to see so much lack of anything that's good, genuine, truthful and not just a cultural niche."

The band sees focusing on image and hype as a dead-end strategy and look instead to evolving musically. They have the humility and integrity to recognize the need for practice, hard work and even taking creative risks. Shea writes the band's lyrics and develops "the original idea for the songs." Then together, he says, the band "tweaks" and "explores" the songs.

Earlier this year, the Dark Knights began working with Misha Hercules and Olympic Records to record their first album. Choosing from their best songs, the band members tweaked each song to fit the record's overall style. Shea says that the band recorded 75 percent of the album live "with all band members in the room." Although perfecting the songs is a tedious process, the immediacy and intensity generated by the live rendering are invaluable. Hercules gets credit for keeping the production clean and balanced while still retaining the rock edge the band possesses.

The resulting five-song "Hurrication EP" is remarkably strong. A gritty, moody rock tone permeates the album and is a complementary contrast to the precise rhythmic changes and intelligent construction of each song.

Shea frequently sings in a deep druggish voice, but he can still summon an earnest line and a commanding scream. The sound's most immediate relative is early- to mid-'90s rock, but with more complexity and structure.

Each song is solid, but I find myself frequenting the end of the EP. "Duple" opens with a repeating guitar riff moving forcibly toward a series of bends, while drums crash down precisely as if to keep the precarious guitar in line. The song feeds off the intricate rhythmic exchanges between the instruments, gradually building intensity toward a frenetic but controlled instrumental blaze with a winding guitar solo.

In contrast, "Luster Lack" which appears at the end of the EP and is a frequent show closer, evokes late-night reflection through iridescent guitar loops and legato stair step bass. As elsewhere on the EP, Shea's lyrics are cryptic and often alienated, an assemblage of disjointed musings rather than narrative lines. He sings: "Bring me back some old paper foreign bills,/Triple stack, love is hiding in a pill./Luster Lack or result is always nil." Despite being enigmatic, the lyrics' bittersweet longing and the song's emotional pull leaves you wanting to press the repeat button, despite the track's lengthy seven-plus minutes.

On the heels of their third tour across the South and Northeast, the band members say they've been playing their best bills yet and had particular success in Canada. They return to Mississippi in May, playing a show May 1 at One to One Studio in Jackson and May 2 at the Thirsty Hippo in Hattiesburg. Sample their music at http://www.myspace.com/darkknightsofcamelot.