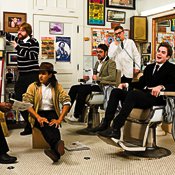 Black Joe Lewis and the Honeybears evoke the sound of James Brown and Booker T. & the M.G.'s.

In the last 10 years, several musical genres have looked to the past to find direction for their futures. There was the neo-soul movement that was supposed to whisk the genre back to the sound of Al Green and Marvin Gaye. The garage-rock revival tried to hearken back to early Who and Kinks. Each movement, despite spawning periodic memorable albums, fizzled out as the leading artists either faded into obscurity or abandoned their sound to chase radio stardom.

Funk-soul is having a similar renaissance these days, and Black Joe Lewis and the Honeybears are the newest artists in the movement. They follow the lead of Sharon Jones and the Dap Kings, who have built a sizable audience since their 2002 debut of James Brown-inspired funk. Lewis and the Honeybears channel their share of Brown with an added touch of vintage Booker T. & the MG's. The idea is promising, as are the grooves, but their sonic emulation ends up compromising the actual songwriting.

The first listen of Black Joe Lewis's new album, "Tell 'Em What Your Name Is!" admittedly knocks you on your heels. It's a guitar-wailing, organ-tinged, horn-drenched sound that's been absent from popular music for years. You want to wield this staggering music on your friends so they can be similarly disarmed.

Sadly, you never reach that first-listen high with the album again. The novelty wears off after a few plays, and the songs prove so unmemorable that you are left to go dust off your old Stax records.

What Lewis and the Honeybears don't realize is that the reason people continue to dance to "In the Midnight Hour" or "Hold On I'm Coming" 40 years after their release is because they are more than just a groove; they are great songs. Solely getting people to dance will only provide fleeting success. Getting people to sing along to what they're dancing to will make you immortal.

Another problem the Honeybears have is their lack of authentic sound. In an effort to mimic Booker T. & the MG's rough-around-the-edges feel, ironically, the Honeybears come off as overly polished. The musty, slightly raw sound the MG's produce on "Hip-Hug Her" or "Green Onions" can't be recreated in a 21st century recording studio without a whiff of artificiality. This is a hard thing to say when the Honeybears are trying painfully hard to sound authentic.

There are flashes of potential on "Tell ‘Em What Your Name Is!" "Gunpowder" is a powerhouse opener that lets you know that Lewis means business and is up for the near impossible task of matching vintage James Brown in energy. "Big Booty Woman" is a fun call-and-response number with a powerful horn and organ line. "Get Yo Sh*t" is a humorous story track that Lewis spends most of the time talking over, only taking brief breaks to boom out the chorus.

Joe Lewis and the Honeybears are a group that would put on a phenomenal concert. Lewis is clearly a born showman, and the band can bite into a groove with overflowing energy. This will only get them so far, though. For the band to last beyond the flavor-of-the-month period, they need to put out a single worthy of their legendary influences. Otherwise they will be forgotten, and this will be another movement that almost happened.

i've seen them live. they are pretty fun, a good band for if you're with a group of people who have diverse taste in music, but yeah, not a lot of depth.