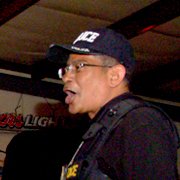 Jackson Mayor Frank Melton is back on the Democratic primary ballot.

In his office in February, Mayor Frank Melton talked about many issues with the Jackson Free Press. Here is an excerpt about his past abuse of alcohol and, if true, some surprising revelations about the guns he used to strap on himself to conduct nighttime "raids" in Jackson before the authorities told him to stop carrying weapons. See the full interview series at meltonblog.com.

Talk about your alcohol use.
I had a bout with that after Katrina. I had a little period of that after I went down to the Coast and saw what I'd seen down there and some of the things I saw up here. I got a little loose with myself; I'm just being honest with you. I used to like a little scotch and water; it would help me sleep. There's no crime in that; I'm a 50-year-old man.

I'll tell you something else, Donna. Sometimes when I'm on a street corner, and the guys are out there sitting around having a beer—and I don't even like beer—I might sit there and take a sip or two and just talk to them, but nothing ....

Well, you had a problem then, right?
Yeah, if it was right after Katrina.

Well, it was (April 2006) ...
And I'm admitting that to you. That thing, Katrina, broke my heart. And I should have stayed here and taken care of the people in the Coliseum. But I went down there, took a helicopter down there, and saw mothers holding onto their babies in the Gulf of Mexico, and people silently floating, and there was nothing I could do. And I just wasn't emotionally prepared to deal with that. Then, coming here, having them here, and then dealing with our homicides here, most of which I went to. And I tell you, Donna, two of them, that triple that we had a few year ago Dexter Lispey executed these three people, that really haunted me. He's in jail. Right off Woodrow Wilson. Then, of course, Keavon Jones really set me back. All of this was happening all together, and I just lost it there for a while.

You don't carry them any more anyway, do you?
No, not right now. They didn't have any bullets in them. The rationale behind that is, who the hell am I going to go shoot? That's the last thing in the world that's on my mind. They didn't have a single bullet in them.

My uncle in New Jersey even knows about Melton. I mentioned him in a conversation to my aunt and he said, "Isn't he like the worst mayor in America?"

"I don't even know how to put bullets in the guns", Frank Melton. Isn't this the same Frank Melton that sat down with Bert Case on TV and showed him a piece of paper stating that he had been through Law Enforcement Training in Texas? He was adamant about his need to protect himself. I have heard him state that he didn't carry a gun; he carried two guns! Let's get real here. Also, it is my experience that most people who have a problem with alcohol claim that they are drinking for a reason, such as grief. But, in reality, they are probably addicted and would drink even if everything were smooth in their life. Alcoholism is a disease of the body, of the mind, and of the spirit. It is often characterized by grandiosity, lack of varacity, and loss of inhibitions.

P.S. All but one month of Melton's time in office is post Katrina.

If melton felt so badly about the victims of Katrina, where was his compassion for Evan Welch, the paranoid schizophrenic who became a double victim, as menton rendered him homeless??????? How was he able to watch the man's toilet being crushed; his TV bashed and his little coffee table torn to splinters???? Yes melton, you really have a BIG heart.

He surely has a strange way of showing compassion.

WMArtin..where oh where can I get a jpeg of that facepalm pic...Classic

How was he able to watch the man's toilet being crushed; his TV bashed and his little coffee table torn to splinters???? Easy justjess, three words. Scotch, straight up.

WMartin, I will have to agree with you on this one. melton had to be on something to mess that helpless man's belongings up like that.