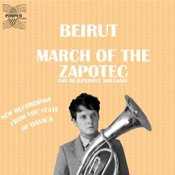 Beirut
"March of the Zapotec/Realpeople Holland"
3.5 of 5 stars

The second EP, "Realpeople Holland," is a collection of previously unreleased recordings from Condon's early musical explorations. Credited to his former band name Realpeople, the tracks exhibit the timeless character of adolescent daydreams. "The Concubine" floats breezily against accordion, xylophone and Condon's melodies.

Despite criticisms of his musical theft and originality, Condon and Beirut continue to be inventive, and I can't wait to see where he takes me next.

"Starting over" has both the lo-fi style and old-fashioned guitar sound of the '60s icons, but with a layer of griminess.

The album's most striking track is "Take My Heart," an intricate mix of winding guitar licks and standard '60s rock drums, which maintain precision while cleverly channeling Iggy Pop. Despite the album's overall strength, "200 Million Thousand" has some throwaways: "Drugs" is a poor revision of beach rock, and though somewhat comical, the noir-cum-'90s rap of "Trapped in the Basement" doesn't fit in with the rest of the album.

Except for a few poor tracks, "200 Million Thousand" is a fun and infinitely listenable album that hides its complexity in poor production and rowdy vocals.

But trust me, this is no mere garage band.

Andrew Bird has been recording music for quite some time, but it's only recently that his buoyant brand of whistle-rich violin pop has drafted a mass audience. His last record "Armchair Apocrypha" was vibrant and unique, and won over numbers of bookish pop fans with rich, intricate melodies and clever lyrics.

Bird's latest, "Noble Beast," draws from the same aesthetic as its predecessor but with a much lighter hand. This shift makes the record less immediate and yields mixed results on repeated listens. Sometimes the drop in intensity makes for boring songs—"Oh No" and "Nomenclature"—whose only saving grace are Bird's crystalline vocals. But in other cases, the album's gentle touch gives songs more room to grow. Both topping six minutes, the latin-lounge of "Masterswarm" and classical tilt of "Souverian" become increasingly compelling on repeated listens, while "Anonanimal" is undeniably one of the best songs Bird has ever written. The dreamy and intricate "Anonanimal" intertwines multiple guitar lines with smooth sweeps of violin, and an ever-unfolding, but never forced, series of transitions.

Given the quieter tone of the record, it's best to give this new offering repeated listens before casting your opinion. You may be surprised at the enchanting power of this unassuming little album.