Irreverence and the Ukulele 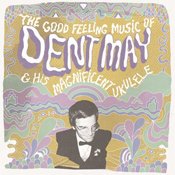 Dent May's "The Good Feeling Music of Dent May and his Magnificent Ukulele" is an odd aesthetic choice for a Mississippi musician. May is from Jackson and currently resides in Taylor, near Oxford. Borrowing from such styles as '50s serenades, Brazilian lounge, and '70s power pop, May's formula boils down to one part exuberance, one part kitsch and one part good old-fashioned melody.

On the first few listens, "Good Feeling" is irreverent fun. May's voice is average, but the earnestness and sheer gusto he brings to his crooning works with his cheeky tunes. His lyrics are silly, but their deadpan humor and endless Oxford and Mississippi references are hard to resist. Songs often feature such off-the-wall tales as one-time '90s tennis star Michael Chang's depression and the difficulty of forcing a dance party.

Unfortunately, there's little depth beneath the novelty, and it's hard to imagine fans talking about this record a year from now.

Despite this shortcoming, May definitely has talent lurking under the gimmick. "Oh Paris," despite the annoying backing vocals and their "shooby dooby dooby" echoes, is an infectious bit of '60s pop and hints at real personal experience. In the song, May sings what appears to be an ode to a first European trek: "Oh Paris you've really done something to me. /You and I seem to agree here tonight. /Oh Paris I like to see you in the rain. /Pretty girls in black berets reading books in sad cafes/I finally know that I belong here in this world."

The song evokes the joy of finding yourself and how alive that recognition makes you feel. The emotional sentiment expressed in "Oh Paris" is one of the few glimmers of authenticity on the record.

With dozens of South X Southwest festival performances and a tour with A.C. Newman of the New Pornographers, May has had his 15 minutes. If he wants to stick around, he should revisit songs like "Oh Paris" and replicate its authenticity and pop sensibility. The results may not be as immediate, but they will probably be more sustainable.