What Difference Does It Make If I'm Green? | Jackson Free Press | Jackson, MS

What Difference Does It Make If I'm Green? 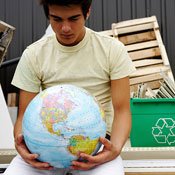 With the world population approaching 7 billion, you may wonder what impact your personal actions could possibly have on the environment. In reality, your actions add up. Consider these five areas of your life where you can make simple Earth-friendly changes, and ways that people around the country and the world can multiply your impact by joining you.

Food
Raising beef contributes to devastating problems like global warming, water pollution, deforestation, and reduction of the world food and water supplies. Livestock generates more greenhouse gases than transportation, and global meat production is expected to more than double by 2050.

• You: Reduce your meat consumption and eat beef only once a week at the most. According to "The Live Earth Global Warming Survival Handbook," "refusing meat" is the most significant thing you can do to reduce your carbon footprint. A vegan in a 4-by-4 is more climate-friendly than a meat-eater in a hybrid car.

• World: Do your part to cut demand for beef and help end world hunger. Nearly 40 percent of the world's grain is fed to livestock instead of humans. The United States is a major importer of beef from developing countries, whose grain feeds the cows we eat instead of the people who live in those countries.

Plastic Bags
Worldwide, 500 billion plastic bags are produced every year. Americans alone use 380 billion a year, of which only 1 percent are recycled. The rest go to landfills, where they take an estimated 1,000 years to decompose.

• You: Bring your own reusable bags to the store instead of using plastic ones. This way, you'll avoid using between 300 and 700 plastic bags per year, the number that the average American takes home.

• Country: Community-wide practices make a difference. If New York City residents alone used one fewer plastic bag per year, they would decrease waste by five million pounds and save $250,000 in disposal costs. Imagine how much every city in the country could save collectively.

• World: Encourage your city to join the world community in banning stores from using plastic bags. The bans, which began last year, are expected to save millions of barrels of oil per year and prevent harm to nature, such as asphyxiated wildlife and blocked waterways.

Carbon Footprint
Carbon dioxide is a greenhouse gas contributing to the annual increase of Earth's temperature, which disrupts agriculture and causes polar ice caps to melt. About 33 percent of U.S. carbon dioxide emissions comes from driving cars and trucks.

• You: Carpool, walk, bike or take public transportation (bus or trolley) to work. The average commuter would prevent 2.6 tons of greenhouse gas emissions by not driving alone to work.

• Country: Next time you're in traffic, look around and mentally multiply your own car's emissions by 204 million, the number of cars on the road every day in the U.S.

• World: Encourage your congress members to follow the example of China, and offer more incentives to buy electric or plug-in vehicles. Earlier this year, Chinese officials announced plans to offer $50,000 yuan rebates (about $7,300 USD) for electric and hybrid cars, and encourage regional and state entities to establish charging stations.

• You: Recycle aluminum cans. Recycling just one can will save enough energy to operate a TV for two hours, a computer for three and a 100-watt bulb for 20 hours.

• Country: Realize the high monetary value of cans. The Container Recycling Institute estimates that the 46 billion cans put into American landfills each year are worth $767 million in raw materials.

• World: Reduce the amount of new aluminum that must be mined and save energy. In just one week, aluminum smelters in China alone use enough electricity to supply 2 million people for one year.

Water
Less than 1 percent of the water in the world is available for drinking, and global water supply is drying up as population rapidly increases. Worldwide water shortage is expected to be a serious problem by 2020.

• You: Reduce the length of your daily shower by just one minute. This will save up to 1,825 gallons of water per year. That's enough to fill 37 bathtubs.

• Country: If every household in the country simply cut their water consumption by one third, the U.S. could save more than five billion gallons of water per year, and millions of dollars per day.

• World: Conserve water and help save lives. We could easily prevent 80 per cent of all illnesses and deaths in the developing world—2.4 billion per year—with clean water and sanitation.