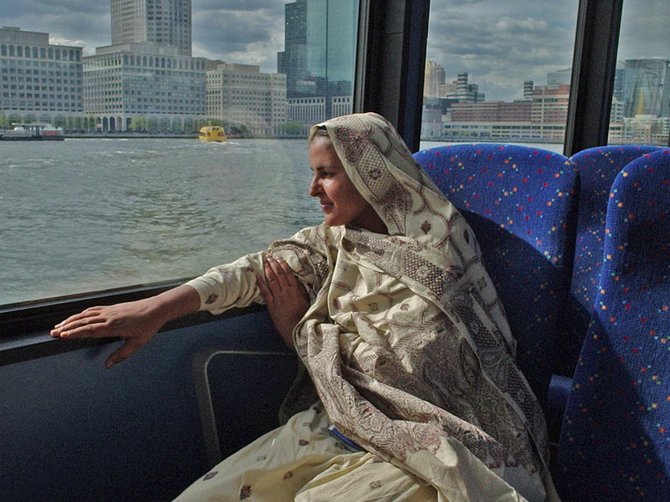 The road leading into Meerwala is a packed-earth track between green farmer's fields. In this remotest corner of Pakistan, the village has no school and no police. Disputes among the 500 local households are taken to the all-male tribal council, which dispenses a brutal, feudalistic justice.

It's not clear when you see Mukhataran Mai's home whether the house has indoor plumbing, though it certainly does not have electricity; no one in the village does. The half-dozen or so bony black and white goats in the yard could be for milk or meat, possibly both.

But "Shame," directed by Mohammed Ali Naqvi, is not a movie about the tragedy of so-called Third World poverty, so those impressions, although striking, are somewhat minor to the story.

In June 2002, Mai's neighbors, the Mastois, accused her brother Shaqoor, then 12, of having an affair with one of their clan's unmarried women, Salma. The punishment against Shaqoor, which included brutally beating, torturing and raping him, was incomplete. In the ancient code of ethics that rules in this isolated and desolate place, Mai's family also had to sacrifice 30-year-old Mai to their injured pride. With the approval of the council, and while her father and her uncle begged them to stop, members of the Mastoi clan gang-raped Mai while the rest of the clan looked on.

In Pakistan, as in other Islamic countries, "honor" punishments are not uncommon, although they are technically illegal. Many women subjected to such treatment commit suicide rather than live with the humiliation. But Mai, a woman without even a first-grade education living in a male-dominated repressive society, decided to fight back. "Shame" is the gently told, uplifting documentary of Mai's courageous journey.

Her fight to bring her attackers to justice brought Mai into the spotlight, first through the local press and then, as the story grew, to the international stage defined by The New York Times' Nicholas Kristof, who described Mai as "one of the gutsiest people on earth."

The Mastois continued to threaten Mai's family after the attack, not allowing them to leave their home, firing rifles and daring them to come out. "What can one do but keep the children quiet and cry," Mai's father says. Mai tried to commit suicide by drinking acid.

"But then I realized the worst had already happened," Mai says. "So I didn't feel scared anymore.  At that moment, something changed in me."

Without access to a telephone, Mai told the village cleric her story, who spoke out against the Mastoi, then escorted her to the nearest police station, 18 kilometers away on dirt roads. In Jatoi, Mai told police what happened, but they filed no report.

Someone told the Jatoi Press Club about the incident, however, and the club sent a reporter to investigate. Now faced with media attention, the police took a report. The first story about the rape appeared on June 30, 2002, and from there, the international news wire picked it up. In short time, the province governor sent Shaheen Attiq-ur-Rehman, the social welfare minister, to investigate. The minister promised justice to Mai, and police arrested 14 of her alleged attackers.

Naqvi tells Mai's story through her family, the reporters who cover it, footage of her village, the countryside and even through her attacker's family. With unapologetic cinematography and without any personal or political comment that could sway a viewer, the film follows Mai through 2006, when Time magazine named her one of the 100 most influential people in the world. Mai's own soft brown eyes tell of her struggle from behind the hijab, her mouth and expressions hidden. Mai's life is ordinary, simple, unaffected; her days filled with work and prayer. Eventually emerging from behind the scarf, she shyly tells how other women gained courage from her actions, even as she is a virtual prisoner in her home because of threats against her life.

Now known internationally, Mai's story continues to provide hope to women everywhere. Awarded enough money by the government of Pakistan to leave her village and start a new life elsewhere, she chose instead to fund a school for girlsand later another for boysso that the people in Meerwala could begin to understand that she was not wrong to speak out, that education can improve their lives. Mai herself began the difficult task of learning to read and write as an adult.

Mai's is not a story that is easy to hear. But in a region of the world so different and foreign, it poignantly illustrates the difference one person, faced with nearly insurmountable odds, can make. There's no Pollyanna here, no easy victory; despite international support Mai continues to struggle with her story and her society, never wavering in her inspiring courage. Her story is about human rights, not just women's rights, and will resonate with every viewer. See the film and be inspired.