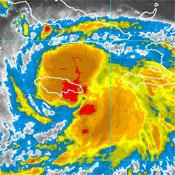 The morning after shelters were turning away frustrated evacuees in the Jackson Metro, MEMA put out a release telling people where space was still available. Verbatim:

PEARL – More than 13,000 Hurricane Gustav evacuees have sought refuge in Mississippi as of 9 a.m. today, but the state still has several large shelters open and space for people seeking refuge from the storm outside the metro area. People trying to evacuate the coastal counties today can stop in the following shelters:

In the metro area Jackson's Coliseum still had 50 spaces available early this morning and the Trademart has 150 spaces available. Combined these sites hold 1,570 individuals. The Jackson fairgrounds can still take 200 small animals, but no more horses. Tupelo has opened its coliseum this morning and it can hold 675 people seeking shelter. If you intend to stay in a shelter please bring clothes, personal items, toys and entertainment for children, any medications you may need, etc.

OK, after spending most of my waking hours since Saturday afternoon monitoring media and emergency sites so that we could keep readers abreast on developments and resources ... why in the hell didn't MEMA put out a comprehensive list of of all shelters available and update it each day (including where animals could go?). It is sounding like evacuees were being sent all around last night as the sheriff's department scramble to find more shelter space—after many evacuees had suffered through long contraflow delays. I've monitored the MEMA releases as they've come out, not to mention other media sites, and have yet to see a list of all the 49 shelters that Barbour said at his press conference yesterday were open. Why were they released piecemeal and how did that help people stuck on roadways trying to figure out where they should get off the Interstate and find a shelter? Note that he also said then that the 1,500 spaces were being held for the people coming from the Coast ont he school buses, and that Louisiana evacuees were being turned away from those reserved spaces. Then note that fewer than 500 people came in on all those buses. So another question arises: Why did they wait so late to send those buses? That meant that many people would be turned away while waiting on them, and then MEMA tells us this morning that there were indeed at least 200 spaces in the Coliseum and Trademart. I know that MEMA has a lot to do, but they knew this hurricane was coming days in advance and that the entire Coasts would evacuate. Why wasn't there a better plan and specifics communicated to the public, and sooner? I really, really hope it had nothing to do with being distracted by McCain and Palin paying a political visit to MEMA in Jackson yesterday. It sounds like they couldn't get in the way if they were over in Pearl, but I'm starting to wonder.

This release is also dated Sept. 1: MISSISSIPPI EMERGENCY MANAGEMENT AGENCY NEWS RELEASE CONTACT: 866- 920-MEMA “Disaster Preparedness Saves Lives and Property” Visit us online at www.msema.org Media Contact 866-920-MEMA 7:45 a.m. FOR IMMEDIATE RELEASE Sept. 1, 2008 More than 12,000 evacuees find shelter PEARL – More than 12,400 evacuees are staying in 97 shelters throughout Mississippi. About 550 people were transported by school buses on Sunday to shelters from Harrison and Hancock County. Many of the evacuees seeking shelter in our state are from Louisiana. “We are able to protect thousands of lives thanks to the tremendous support from volunteers,” said MEMA Director Mike Womack. “There is still shelter space available for people who need to seek refuge from Hurricane Gustav. Please call MEMA or Red Cross or 211 to find out what shelters are open and where they are.” Mississippi’s lower six counties alone have 3,134 evacuees in 19 shelters. The list of open shelters will be updated regularly by MEMA. Call the following numbers for the most recent information: 1-866-519- MEMA, 1-800-Red-Cross, 2-1-1 or 1-866-472-8265. People who plan to stay at a shelter should bring the following: Clothes for three to five days Medications Blanket, pillow Personal hygiene items Identification Accommodations for children (personal items, entertainment, toys) For more information call MEMA’s Public Information Line at 866-519-MEMA or the Media line at 866-920-MEMA or visit www.msema.org. ###

OK, the shelter plot thickens a bit with a city release (faxed) from Melton's office last night (again, text, people, text). I'll retype it here: Donations Needed: In our efforts to assist the American Red Cross with shelters for our neighbors from New Orleans, Louisiana and the Mississippi Gulf Coast, we are opening emergency shelters in the City of Jackson. We are asking the citizens of Jackson to join us in this effort by donating NEW twin sheets and blankets. You may bring these items to Champion Gym, located at 1355 Hattiesburg Street in Jackson, MS. For health and safety reasons, we can only use NEW items and only sheets blankets are needed at this time. We will inform the public regarding other items if and when it becomes necessary. For information regarding shelters and other services, please call the Mayor's Action Line at 601.960.1111 or 211. #### SPECIAL NOTE TO MEDIA: Please do not announce that Champion Gym is a shelter. The American Red Cross and the City of Jackson have a systematic method by which each shelter will be filled, in order to utilize facilities and staff personnel in an efficient and cost-effective manner.

Note that they are calling for new sheets after 9 p.m. on a Sunday night, and presumably after the people on the school-buses arrived. Why didn't this call go out sooner so more people could help?

I just heard on MPB that the Multi-Purpose Center south of Hattiesburg is taking people needing shelters. No pets, though.