Q: Brandon Garcia wants to know, "What does the Vice President do?" 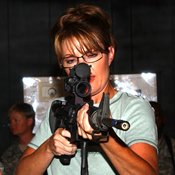 Sarah Palin thinks the VPOTUS is "in charge of" the Senate.

Vice presidential candidate Sarah Palin has now erroneously stated, twice, that the role of the vice president is to be "in charge of" the Senate. Watch the latest example here. Here's what she said:

PALIN: That's something that Piper would ask me!  [T]hey're in charge of the U.S. Senate so if they want to they can really get in there with the senators and make a lot of good policy changes that will make life better for Brandon and his family and his classroom.

Of course, this is patently false.

But remember that she said in her debate that she is in favor of Dick Cheney's view that the vice president should get additional powers than granted by the U.S. Constitution?

This comment is all the more puzzling because this is at least the 2nd time she has said this. Gov Palin needs to re-read or perhaps read for the first time the Constitution. While the Vice President presides over the Senate, he or she is not in charge of it. Article 1 says The Vice President of the United States shall be President of the Senate, but shall have no vote, unless they be equally divided. The Senate is part of a co-equal branch of the federal government.

Good grief: This woman is scarily uneducated about the very job she so desperately wants. Can you imagine what she would try to do should something happen to McCain? Or, as this indicates, even as vice president!?!

Once again, Palin proves the point that when unscripted, she is ignorant about the facts. She doesn't understand the job she's running for, and beyond the coaching she's received, has little knowledge about the issues, leaving her decidedly one-dimensional. If I were in her shoes, I wouldn't grant interviews from people not guaranteed to be friendly, either. But then, I'm not running for vice-president of the United States.

Ronni, et al, as most of you know, I don't like to talk badly about Palin, the first female republican vice-presidental running mate. In fact, I usually resist doing so. However, the average republican is so blind and stupid to its party's platform and candidates that Palin could come out dressed in red mud, sanging I hate all but whites, prancing to music of Sweet Home Alabama (which I admit I like even if not the lyrics), and winking with both eyes. No matter how appalling that would be to most of us, it wouldn't count against her in their eyes because she's one of them.

As I think about it, derailin' Palin is very much like Frank Melton. I saw her in an interview last night but I couldn't bear to watch it. I had just seen Jay Leno, a good comedy act; and wasn't in the mood for comics who don't know they are one. Neither Frank nor Plain will admit they don't know something. Instead they will talk as it they do and quickly change the subject to talking points that suppose to reflect their self-actualization or platform, if you believe they ever had a platform. I call them bullcrappers and I don't want to hear them unless I'm at the comedy club.

I've fallen in love with Ann Telnae's animated cartoons. Here's one on Palin's inaccurate description of the VP's "great" job.

I saw some clips of a Saturday Night Live special edition program last night with actors playing Bush, Palin and Cheney. Bush says he picks or endorsed McCain because McCain will carry on his programs or something like that since he voted with him 90% of the time. I intimated Palin is the female version of him. I can see that. If theis is the repeat most Americans want, let's have it.

Palin could come out dressed in red mud, sanging I hate all but whites, prancing to music of Sweet Home Alabama and winking with both eyes. No matter how appalling that would be to most of us. Rooowrr ...speak for yourself.