Obama Opens Up 14-Point Lead Due to Palin and Attacks 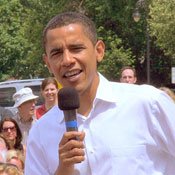 President Barack Obama will be visiting the Katrina ravaged Gulf Coast in October.

CBS News just announced the results of its latest poll, which finds that Barack Obama has opened up a 14-point lead over John McCain in one week, and has taken a commanding lead among independent voters. Voters cite the choice of Sarah Palin and the vicious attacks out of the McCain-Palin as primary reasons:

Democratic presidential nominee Barack Obama is entering the third and final presidential debate Wednesday with a wide lead over Republican rival John McCain nationally, a new CBS News/New York Times poll shows. The Obama-Biden ticket now leads the McCain-Palin ticket 53 percent to 39 percent among likely voters, a 14-point margin. One week ago, prior to the Town Hall debate that uncommitted voters saw as a win for Obama, that margin was just three points. Among independents who are likely voters - a group that has swung back and forth between McCain and Obama over the course of the campaign - the Democratic ticket now leads by 18 points. McCain led among independents last week.

McCain's campaign strategy may be hurting hurt him: Twenty-one percent of voters say their opinion of the Republican has changed for the worse in the last few weeks. The top two reasons cited for the change of heart are McCain's attacks on Obama and his choice of Sarah Palin as running mate.

God bless America. I cannot express how proud I am that most people in our country are rejecting the hate.

God bless America indeed. I knew that McCain's attacks on Obama wouldn't go unnoticed. As long as these vicious attacks keep going, I wouldn't be surprised at all if Obama's lead go up to near or at 20%. I haven't read the poll yet, so I'll see if these numbers break down even further.

And here's something may swing polls numbers even more into Obama's advantage. From CBS News: CBS News' Michelle Levi reports that a PAC called Our Country Deserve Better is now running an ad that is essentially a compilation of most of the character and association attacks made against Barack Obama throughout the year. The ad, "Obama's Wrong Values," began running Sunday night in Reno, Nevada and has since expanded across the state. The group plans to air the spot in Colorado starting tomorrow and run it in Michigan – where McCain has pulled his advertising – by the end of the week. According to a PAC spokesman, the group has already spent just under $100,000 in Nevada and Colorado to run the spot. The group said its budget in Michigan is "$500,000 or higher." It said it has plans to expand to Ohio and Pennsylvania, adding that its funding comes largely from a large number of small donors. Later, in a quote from the ad: "His supporters put up Cuban flags with the murderous leftist Che Guevara in Obama's campaign offices," the narrator continues. "Obama's campaign received $33,000 in illegal donations from Palestinians living in the Middle East. A top official of the terrorist group Hamas endorsed Obama's campaign. And who can forget these hateful sermons from Obama's pastor of over 20 years." I'm interested to see how much McCain will lose Ohioans and Nevadans now with this kind of ad. But I expect it still get even worse before Election Day/my birthday.

Pass Palin the mike or platform and watch what happens now. I predict she will get worse and increase the fallout and division. Palin is the southern strategy with many legs. Polls can be wrong and can change abruptly. But I'm glass too to see that apparently most of us are rejecting obvious racism and prejudice right now.

IF, the polls end up predicting 11-4 for O. I WILL feel REALLY proud that for the first time our country may have turned the corner on race/ethnicity. This is what Michelle was trying to say.

Easy to win Nevada when Tony Romo and Marion Barber III are voting for you. Thanks ACORN.

That's pure wingnuttery. ACORN was the victim of a few workers who cheated it. ACORN flagged the fraudulent apps and turned them in as required. Only wingnuts expect Tony Romo to vote in NV!

With the polls going in this direction VP Cheney has agreed to undergo a procedure to finally have a human heart transplanted. Maybe the other dude will get a brain transplant to finish out his next 3 months.

Monkey brains and hearts would even be better --- those might stand less chance of being rejected.