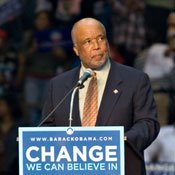 Rep. Bennie Thompson's seat is pretty safe tonight. But how will his choice for president fare?

The polls are starting to close in some spots on the East Coast. Here's where you can chat about the returns.

Early exit polls: The first exit polls for the 2008 election have been released -- not candidate poll numbers yet, but rather perceptions on particular issues. The key concern to most voters, far and away, was the economy, which 62 percent of respondents said was foremost on their mind. Iraq, once thought to be the chief issue of the election, was chosen by only 10 percent of voters are their primary concern. (Among that subset of voters, Obama had a 2-1 lead.) Meanwhile, nine percent of voters said terrorism was the top issue, the same number who listed health care. There are some other interesting numbers to glance over. More than a quarter of voters -- 27 percent -- said that they had been contacted by the Obama campaign. Fifty-one percent said they believed government could be doing more to fix the problems of the country (43 percent said less). Sarah Palin proved to be a drag on the ticket. Just 38 percent believe that the Alaska Governor was prepared to be President, far less than the 67 percent who said Joe Biden was prepared. And for all that "who is Barack Obama?" criticism, more voters were scared of a potential McCain presidency -- 30 percent -- than an Obama win -- 23 percent.

Informative piece by Howard Dean's pollster: How to Read The Numbers.

Josh Marshall at TPM: Late Update: Remember, these are exit polls are that are often unreliable. So take these as hints, not facts. The early exits we're seeing out of Virginia suggest a close race with an advantage to Obama. The split of the white vote looks similar to what Jim Webb got in 2006, but with blacks making up a substantially larger percentage of the electorate.

From the DailyKos voter guide: Presidential - Indiana The presidential contest has not been especially close here for several elections. The last time Indiana was too close to call when polls closed was during Bill Clinton's 370-electoral-vote landslide in 1992. Even then, Clinton wound up losing the state by a significant margin. If Indiana is announced too close to call when polls close this year, it will be an indicator that Barack Obama is headed for a similar landslide victory himself, even if he isn't quite able to carry the state. If Obama wins Indiana, you can start popping the champagne corks. While it doesn't get him to 270 (when added to the Kerry states), it puts him just seven short, and victory in any one of Iowa, Virginia, North Carolina, Florida, Ohio, Colorado, Missouri (or in both Nevada and New Mexico) would win the election for him. If Obama takes Indiana, he'd likely carry a number of these states and amass over 350 electoral votes. Hint: At 21 minutes after the hour, Indiana is too close to call.

Marc Ambinder: Non-College Whites: A Point To Remember For The Evening As you read the exit polls and watch the precinct returns, remember that President Bush 's national margin over John Kerry among working class white voters (defined as whites without college degrees) was 23 points.....

MSNBC has projected Kentucky and South Carolina going for McCain, while Obama has been projected the winner of Vermont. Right now, Obama has a 65-35% lead over McCain in North Carolina, but it's very early. Indiana is too close to call.

Fox News has projected Kay Hagan will win the Senate in North Carolina, giving another seat to the Democrats. Obama has a big lead in Florida, but it's still early. He also has an early lead in Texas, but that's with less than one percent of the vote. Fox is giving Obama an 81-39 electoral vote advantage.

Good news for Obama from an Indiana paper.

Must be depression setting in at FOX News.

Eventually it will. BTW, the time under the comments are wrong. Now it's on Mountain time.

CBS is showing McCain with an ever-so razor thin lead in the popular vote. I expect this to change throughout the night.

From Salon.com blogging: David Talbot (8:30 p.m. EST): Oh, my God, did you all just hear what Ann Curry on MSNBC said? Even most white voters in North Carolina for whom "race was a factor" went for Obama. This isa new America. __________ David Talbot (8:22 p.m. EST): Another reason to be a proud American tonight: Obama matched McCain among white voters in Pennsylvania, significantly outperforming Kerry's tally four years ago. So much for the Bradley effect. This country continues to be an inspiring social experiment.

From DailyKos re: Virginia/good to know: Yeah, Obama is down 100,000 votes in Virginia, but there have been hardly any votes reported from the ver y large and very solid blue NoVa counties -- Arlington, Alexandria, Fairfax. Just wait -- it took Webb a while to lock that race down in 2006, largely because NoVa came in slower. Everything is cool -- Virginia is still very much in play.

HUGE: Ohio for Obama. No real path for McCain now if Pennsylvania is real. They tell me. ;-)

Mississippi has been declared for McCain. Hmmph.

No surprise. Obama never had a chance here realistically.

Today is my 34th birthday and I never thought that in this stage in my life, I would witness a black man become president of the United States. History is being made tonight and I'm glad to be living it--and that it happened on my birthday. Thank God for life!

Fox News has called Virginia for Obama! Also, Obama is leading in the raw count in Indiana with 93% of the precincts reporting. He is slightly behind in North Carolina, but is within striking distance. But California, Oregon and Washington have yet to report, so he doesn't really need North Carolina to win.

Yes, he did show class. As far as the audience is concerned, well...

Obama landslide. First Democrat to carry Virginia since 1964. And while he lost Mississippi (with 43% at last count), he did substantially better than John Kerry (40%) and may end up doing as well as Al Gore (44%) by the time all the votes are tallied. The fifty-state strategy has succeeded. Kudos to Governor Dean--and President-Elect Obama.

Guess who's coming to the white house.