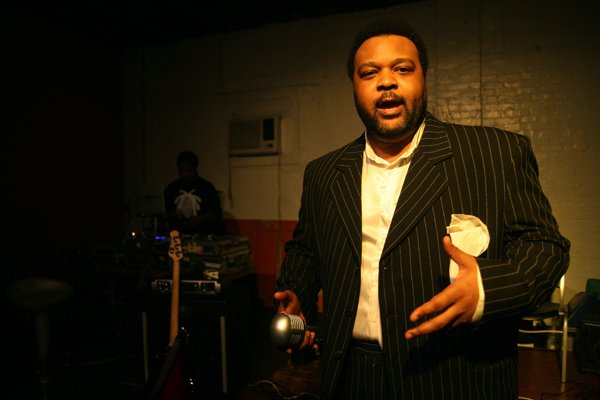 Writer/poet/educator/activist C. Liegh McInnis was the guest of honor at a Dec. 20 event at Seven*Studioz. Photo by Lizzie Wright

As a child growing up in the Delta, Clarksdale native C. Liegh McInnis began reading to counter the small-town blues. Since leaving to attend Jackson State Universitywhere he is now an English instructorMcInnis has accomplished some of the same achievements as the writers he idolized as a child.

In 1996, he started his own publishing company, Psychedelic Literature, as a way to publish his books. The company has blossomed, and now produces the Black Magnolias Literary Journal, which is geared toward inspiring young African Americans. McInnis has written seven books, including the short fiction collection "Scripts: Sketches and Tales of Urban Mississippi," as well as "The Lyrics of Prince: A Literary Look At a Creative, Musical Poet, Philosopher and Storyteller," which analyzes the songs of the musician. He also has written four collections of poetry.

How did Black Magnolias Literary Journal get started?
I've always wanted to publish in newspapers and magazines, and that's how I always saw writers. When I was a kid, I would read a lot of James Baldwin and Amiri Baraka and other writers, so I always expected writers to have poems, essays and stories published in magazines and newspapers.

As I began to publish, and I realized how difficult it wasparticularly being a Mississippian and an Afro-Mississippianthere was no real outlet.

I was actually conducting a workshop for college kids, and a young man had written a story about a subway. I asked him if he had ever ridden a subway, and he was like, "Well, no, this is just all I see and all I read." It said to me that, OK, if we don't have outlets that publish Mississippi writers that are specifically Afro-Mississippi writers, we are not going to have anybody to tell our story.

What inspired you to be a writer?
I read a lot. I was a writer at a very young age in that I wrote always for therapy. When I was a kid, being born an only child in the Mississippi Delta, I fought a lot with people that had brothers and sisters, which means I lost a lot. (Laughs) So my way of vindication is that  when I would get angry  I would write these Westerns where I was the hero and all of the friends and people in the neighborhood that I was angry at would be the bad guys. So that's how I started writing.

Of all of the places you could have gone to write, why did you decide to stay in Jackson?
Jackson was a metropolis because I was raised in the Delta. I am a blues boy by heart. I love blues culture. I love blues people. I love the people who created the art (of the blues). So, while New York and L.A. and New Orleans are fun to visit, I couldn't untame myself from the love of blues culture and these people.

Many of your works are socially motivated. Where does that passion come from?
From my parents and the types of writers that I read. I don't believe that art should be separate from ritual. I'm one of those people who thinks that art should be connected with ritual, that art should have a purpose, other than being entertaining. In fact, the entertainment of the art is how socially moving or impacting it is.

What advice do you have for young writers?
Two things: Read and write. If a person comes to me and says that they want to be a writer, the first thing I ask them is, "Who do you read?" That was the first question all of my mentors asked me because they could measure my level of seriousness as a writer based on who I read. You can't write well if you don't read a lot. It's very simple.

You may have some innate storytelling abilities, but eventually, writing is about craft. Even essay-writing is about the elements of rhetoric. If you want to write well, you have to read the writer who writes well.

After you read and write, you want to go to workshops, as many as you can. Take advantage of your English teacher and what's available to you locally. As you are reading and writing and getting better, submit (your work). You have to submit.

For more information about C. Liegh McInnis and his publishing company, visit psychedelicliterature.com.