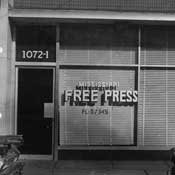 Before Martin Luther King Jr. stood on the National Mall in Washington, D.C., telling the nation of his dream in 1963, Medgar Evers also had a dream. The civil-rights activist and NAACP field officer dreamt of a newspaper to reach the under-served black population of Mississippi as he tried tirelessly to recruit blacks to vote. The paper would be filled with advertisements from black businesses, instructions on how to register to vote and the real facts about the violence against the movement.

That dream was the Mississippi Free Press.

Backing Evers was white Lexington newspaper publisher Hazel Brannon Smith, Rev. Robert L. T. Smith and Bill Higgs. The state-run civil rights spy agency, the Sovereignty Commission, had already identified Brannon Smith as a "trouble maker and an integrationist." Smith, who was black, would become the future leader of the Mississippi Democratic Freedom Party. Bill Higgs, a former segregationist, was one of the only white attorneys at the time working on civil-rights cases, including James Meredith's acceptance to the University of Mississippi.

While the Mississippi Free Press was still a dream, Paul Brooks and Catherine Burks were already fighting for civil rights in Nashville, Tenn., during 1960. A student at Tennessee State University at the time, Burks wanted to be a teacher. Brooks was a seminary student. After working with the Central Committee with sit-ins and stand-ins around Nashville, they joined the Nashville Movement Freedom Riders and boarded a bus headed to New Orleans—if it got that far.

They knew what could be lying ahead. The riders had all seen what had happened to the original Freedom Riders.

"I couldn't let Bull have the last word," she says now. "In the cowboy movies, if something was going to go down, you were going to get out of town and leave town. You were going to leave by high noon."

Burks looked Connor in the eye and said, "We'll be back in Birmingham at high noon tomorrow," as Conner ran them back toward home. As promised, the group was back at the station the next day.

On May 28, 1961, the third bus of Freedom Riders arrived at 5:30 a.m. at the Jackson Trailways station with both Burks and Brooks on board. As they moved into the lobby, the police captain shouted, "Move on. Move on. You're under arrest."

Police arrested all who walked through the door of the lobby on charges of breach of peace and took them to the city jail. Tried the next day in municipal court, they were each fined $200 and sentenced to 60 days in jail.

Five days later, Burks and 13 other TSU students were expelled because of the arrests. A 1960 ruling by Tennessee's State Board of Education allowed any state-supported institution to expel students convicted of misconduct.

After leaving city jail in Jackson, Burks began dating Brooks, following him to Chicago to raise money for the Southern Christian Leadership Conference. Fundraising for the movement took them to Monroe, N.C., where they were married.

Soon after, the couple moved found themselves back in Jackson where they lived in the Freedom House at 714 Rose St. working for voter registration.

On Dec. 15, 1961, Evers, Brannon Smith, the Rev. Smith, and Paul Brooks met to form Hico Publishing Company and Mississippi Free Press. Sovereignty Commission agents watched their every move during the meeting, documenting it for their chairman, then Gov. Ross Barnett.

Burks-Brooks is credited with helping the publication from 1962-1963, but as she sat in her Center Point, Ala., home in late April, she laughed when asked what her role was. "Could you be (considered just) an honorary editor?" she asked. She gives her husband all the credit.

While Paul Brooks was busy working with Mississippi Free Press, Burks-Brooks went back to Nashville to file a lawsuit against the university for suspending her in hopes that she would be able to graduate. She won her case in 1962 and was able to finish in one quarter, taking the nine hours she needed for her elementary-education degree.

Coming back to Jackson the same year, Burks-Brooks remembers how it felt to be in the middle of the hype around the paper.

"It was tense. We were never ... in constant fear. We felt we were being watched (by the Sovereignty Commission), and people used to say we were paranoid," she said. "We weren't as paranoid as people thought we were."

While some details are blurry, she remembers delivering the paper with her husband to Brannon Smith in Lexington to be printed.

"She was very nice," Burks-Brooks said. "I remember that. Her expression was very pleasing."

At the time, Evers' career had taken off, leaving the Mississippi Free Press under the direction of Brooks.

"(Evers) was more involved with the NAACP work than he was with the paper, but because his office was there, we would see him quite often," Burks-Brooks said. "That's why I was so surprised when they killed him, because we were doing more than he was doing. Not that we wanted to be killed, now."

Byron de la Beckwith gunned down Evers in his Jackson driveway on June 12, 1963, in front of his family.

Soon after the couple left the paper for Chicago. There, Paul invented the Afro Pick with such success that he created factories in Detroit, Mich., and Ottawa, Canada.

Without Evers' or Brooks' leadership, the Mississippi Free Press looked to the Atlanta NAACP offices for direction. The paper continued with major shifts in the editorial department, extensively covering Freedom Summer in 1964 and the murders of Freedom Summer workers James Chaney, Andrew Goodman and Michael Schwerner.

In 1965, Editor Henry Kirksey was one of a group of Mississippians to file suit to redistrict the state. The voting districts then made it impossible to elect black officials. As a result of the suit, Kirksey became the first African American elected to the state Senate since Reconstruction.

"[E]ven more important the Mississippi Free Press makes a pledge of helping to secure these rights for those Mississippians who have been denied them."

The Jackson Free Press is named in honor of the Mississippi Free Press.